What has your political party's presidential nominee done this week?


Does our world matter?

I don't really get that vibe from Adam Schiff and other nut jobs in Congress, do you?

They're really good about gabbing on about what a threat Russia supposedly is but when it comes to the destruction of our environment, they have nothing to say.

Dr. Jill Stein 🌻‏Verified account @DrJillStein Apr 27
Dr. Jill Stein 🌻Retweeted ThinkProgress
DNC attack dogs at "ThinkProgress" get it wrong again. This tweet is simply false. They clearly didn’t read attorney’s letter in their own article. After they had to correct false info about us in their last article. This made-to-misinform blog is the opposite of journalism.
Dr. Jill Stein 🌻added, 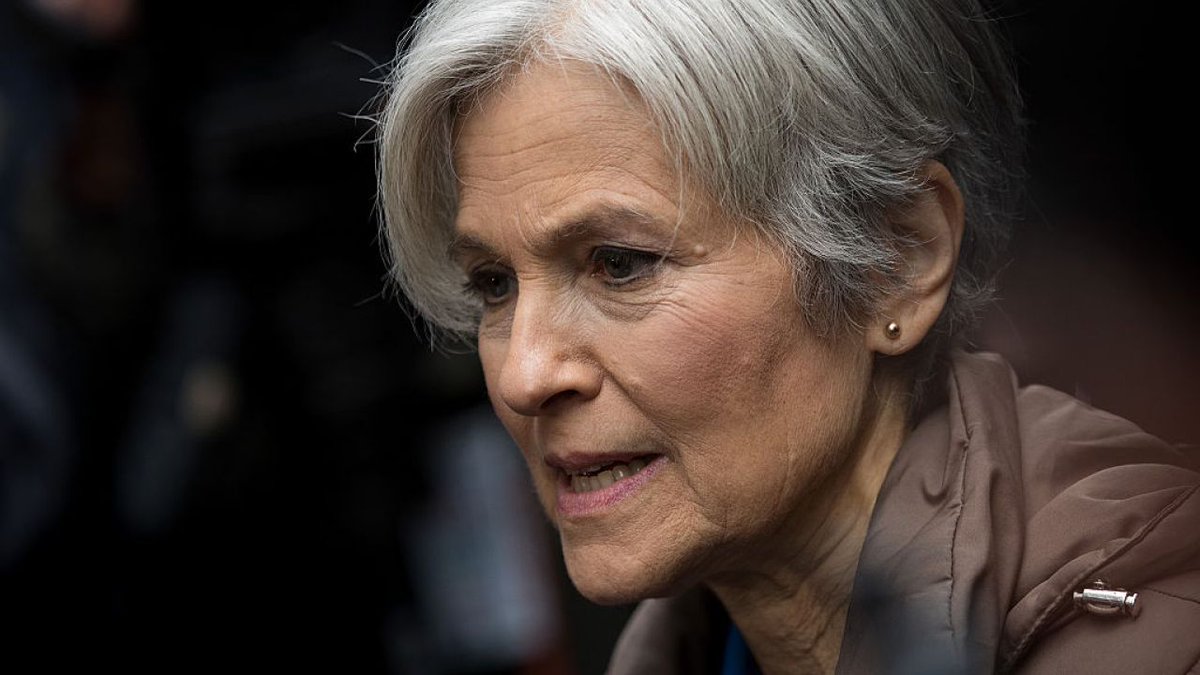 
Yes, they do.  And after Neera's attack on a woman for coming forward about harassment this week, you'd think ThinkProgress and the others would shut the hell up.

Shows you what really matters to some.


Starting in the US, Senator Bernie Sanders ran for the Democratic Party's presidential nomination in 2016.  Yesterday, he Tweeted the following.

Bernie Sanders‏Verified account @SenSanders 19h19 hours ago
I voted against Pompeo because we need a secretary of state who'll check Trump’s bellicose nature, not encourage it. After 15+ years of war in Afghanistan and Iraq, we need someone who will bring nations together in diplomatic efforts, not someone who supports never-ending wars.
250 replies1,384 retweets6,318 likes

Someone who has presidential aspirations still thinks that cuts it?  That being 'antiwar' means you vote against a nominee?  I agree that we don't need never-ending wars, Bernie, but the way I see it, you're supporting those wars.  Where's your big speech decrying these ongoing wars?  I don't mean 15 years ago.  You've grown silent and complacent and, yes, complicit.

What are you doing to end the ongoing wars?

You're not connecting them when you give your economic speeches.  But these wars impact the economy -- they drain the tax dollars that could -- and should -- be spent on needed programs for American citizens and instead are spent on death and destruction.

May 12th, elections are supposed to take place in Iraq.  Ali Jawad (ANADOLU AGENCY) notes, "A total of 24 million Iraqis are eligible to cast their ballots to elect members of parliament, who will in turn elect the Iraqi president and prime minister."  RUDAW adds, "Around 7,000 candidates have registered to stand in the May 12 poll, with 329 parliamentary seats up for grabs."  AFP explains that the nearly 7,000 candidates includes 2014 women.   RUDAW also notes that 60 Christian candidates are competing for the five allotted minority seats.  The chief issues?  Mustapha Karkouti (GULF NEWS) identifies them as follows, "Like in previous elections, the main concerns of ordinary Iraqis continue to be the lack of security and the rampant corruption."

As noted in the April 3rd snapshot, pollster Dr. Munqith Dagher has utilized data on likely voters and predicts that Hayder al-Abadi's Al-Nasr will win 72 seats in the Parliament, al-Fath (the militias) will get 37 seats, Sa'eroon (Moqtada al-Sadr's new grouping) will get 27 seats, Nouri al-Maliki's State of Law will get 19 seats, al-Salam will get 18 seats (KDP and PUK parties for the Kurds), Ayad Allawi's Wataniya will get 15 seats. There are others but Dagher did not predict double digits for any of the other seats. The number are similar for the group of those who are extremely likely to vote (Hayder's seats would jump from 72 to 79 seats).  Other predictions?  The Middle East Insstitute's Fanar Haddad insists to Sammy Ketz (AFP) that the post of prime minister will come down to one of three people: Hayder al-Abadi (current prime minister), Nouri al-Maliki (two time prime minister and forever thug) or Hadi al-Ameria "a leader of Hashed al-Shaabi, a paramilitary network that played a pivotal role in defeating IS. Ameri comes from Diyala province and is a statistics graduate from Baghdad University. He fled to Iran in 1980 after Saddam executed top Shiite cleric Ayatollah Mohammed Baqr al-Sadr. The 64-year old is widely viewed as Tehran's favoured candidate."

Dr. Harith Hasan al-Qarawee believes that "we are approaching a case where sectarianism is not the main definer of political alliances."


He shared this opinion Wednesday at The Atlantic Council's roundtable in DC -- NBC NEWS' Vivian Salma moderated the discussion.  Hartih Hasan al-Qarawee argued that this move could be seen in the campaigns, "Prime Minister Abadi's running a list that is running in all Iraqi provinces with Kurdish and Sunni members.  That is a positive development.  Moqtada al-Sadr is aligning with Communists Parties, with secularists and running in Sunni and Shia provinces."

Not all present agreed.

"I wish I was as optimistic as Harith is," declared the Iraq Foundation's Rend al-Rahim.  "I do think there is a rhetoric that utilizes the cabinetry of a civic government, a secular government, anti-sectarian and so on.  And I think there is -- certainly on the part of Abadi -- and also Moqtada al-Sadr -- to reach out across the religious and sectarian lines.  I think though that this is not a deep layer of commitment.  I think it is more lip service than a reality.  And it's lip service that's driven by increasing electoral voices -- voters who want less sectarian government, who want civic -- i.e. secular government.  But, in fact, the leaderships that tower at the head of these coalitions that are contesting these elections?  I don't believe that they have a very deep seated belief in that with a few exceptions.  I think Abadi tends to be more open.  Moqtada al-Sadr who continues to amaze and surprise also comes to the conclusion."


Turning to the topic of campaign posters . . .

Lawk Ghafuri‏ @LawkGhafuri 14h14 hours ago
Candidates in #Iraqi elections in #Basra and #Baghdad wrote on their campaigning posters that “Prophet Muhammed and Imam Ali’s wife Fatima” asked them to candidate themselves in the dream. #IraqiElections is becoming a religious event in #Iraq.


Some posters depicting female candidates in make-up and without Islamic headscarves, have provoked a mixed response from an electorate more accustomed to voting for unsmiling religious clerics.
While some voters said the images were a welcome change to the dry, male-dominated campaigns of old, others accused the women of lacking “political depth” and relying on their looks to woo the public. The candidates themselves have defended their unorthodox approach as just another way to generate interest in the election.
In an interview with Iraqi news agency, Al-Manar Press, Mannal Al-Mu’atassim, said she hoped her fashionable image would motivate more young people to support her in the polls. She told Arab News that while she was “not betting” on her looks to win her more votes, she regarded her appearance as more important than her ability to debate conventional political issues.
“I believe that Iraqi voters are heading toward choosing new faces, so there is no need for an electoral program or slogans,” she said.


At this week's Atlantic Council roundtable, Rend al-Rahim offered that the candidates were largely the same, "So I would say there is a shift in the mood of the electorate but I don't think it is adequately reflected in the political leaders.  Now there is certainly continuity because many of the old faces that we saw in 2010, 2014 are repeated.  I mean are there any brand new names?  Have any stars emerged that we can look at and say, "Wow, there's new blood in this political process!"?  I don't think so.  But the deployment of these faces, this leadership has changed."

Indiana University's Feisal al-Istrabadi argued that, in 2010, they saw a push for a national identity but "as soon as those election results became known everyone sort of went back into the corners that  they were accustom to and we sort of got more of the same."


But why was that?

Maybe because they went with national patriotism -- the voters did -- by backing Iraqiya which was not about sect.  That's why Iraqiya, led by Ayad Allawi, won.  But the US government refused to back those results and Nouri al-Maliki -- who lost -- refused to step down.  For eight months, the Iraq political process ground to a halt and this only ended with the US negotiated contract known as The Erbil Agreement which gave Nouri a second term as prime miniter -- one the voters had not supported.

When you grasp those events, you realize why people might go "back into the corners that they were accustom to."  And you realize the very real damage the US government did in 2010.