Meanwhile, we really have the wrong ideas when it comes to heroes.

Dan O'Sullivan‏Verified account @Bro_Pair 10h10 hours ago
Dan O'Sullivan Retweeted Master
Oh God. He beat the shit out of a toddler so badly he went to the hospital. He punched his son in the groin. F**king spare me.
Dan O'Sullivan added, 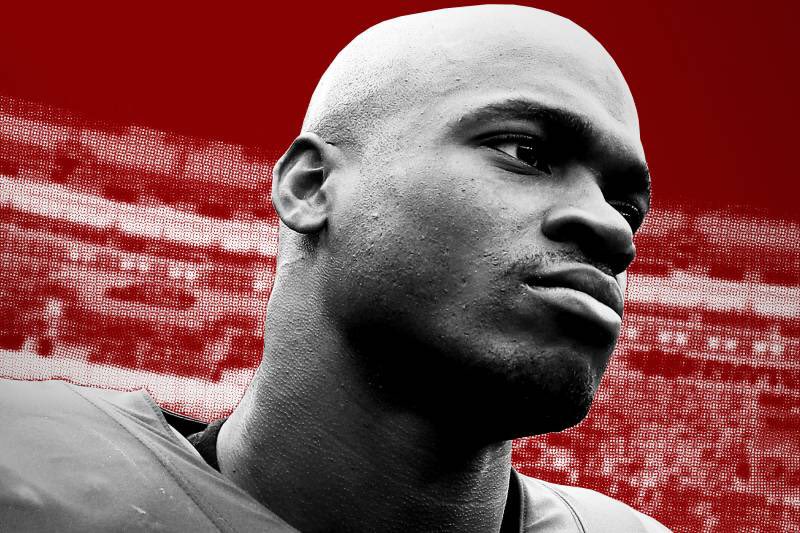 MasterVerified account @MasterTes
Adrian Peterson has defied the odds in his NFL comeback. Yet, his image remains sullied from a corporal punishment case involving his son.…
4 replies31 retweets219 likes


In 2014, Adrian Peterson was charged with felony child abuse, entered a plea deal to misdemeanor reckless assault, and was suspended from the NFL for beating his son. In a shocking new interview, Peterson has admitted that he still hits his son with a belt.
“I had to discipline my son and spank him the other day with a belt,” Peterson told Master Tesfatsion of Bleacher Report.
Peterson is no longer on probation for the previous abuse case, but his public admission could draw scrutiny from legal authorities. Different states have different laws about parents physically disciplining their children, and it is unclear from the Bleacher Report article where the incident with the belt took place.
Regardless of any legal issues, Peterson could also now face discipline from the NFL, which made clear when Peterson was suspended in 2014 that his reinstatement was dependent upon his agreeing to go through counseling and be a better father to his children.
“The timing of your potential reinstatement will be based on the results of the counseling and treatment program set forth in this decision,” the league told Peterson in a 2014 letter. “Under this two-step approach, the precise length of the suspension will depend on your actions. We are prepared to put in place a program that can help you to succeed, but no program can succeed without your genuine and continuing engagement. You must commit yourself to your counseling and rehabilitative effort, properly care for your children, and have no further violations of law or league policy.”
If the NFL views Peterson hitting his son with a belt as a failure to “properly care for your children,” he could be suspended regardless of whether he faces criminal charges. The NFL has made it clear with past incidents that players can be disciplined under the personal-conduct policy even if they are not criminally charged.

Wednesday, November 21, 2018.  The press and the US government continue to pretend with regards to Iraq.

In Iraq, excuses not governance.


Al-Araby Al-Jadeed claims that there is hope of a resolution in the dispute between #Amiri’s Al-Fateh coalition and #Sadr’s Saeron alliance over the interior ministry portfolio. Sadr rejects Amiri’s candidate, Faleh El-Fayad. #IraqCabinet
1 reply1 retweet0 likes

David M. Witty‏ @DavidMWitty1 Nov 19
In Iraq on Twitter, Sadr tells Ameri that members of Ameri's Fatah & Building coalitions are selling cabinet positions to Sunni politicians. Says that is not how they agreed to govern Iraq. mobp.as/0KXIn
1 reply2 retweets3 likes

All this time later.


May 12th, Iraq held national elections.  Ahead of the elections, there had been big hopes -- these hopes included a large turnout.   Ali Jawad (ANADOLU AGENCY) noted, "A total of 24 million Iraqis are eligible to cast their ballots to elect members of parliament, who will in turn elect the Iraqi president and prime minister."  RUDAW added, "Around 7,000 candidates have registered to stand in the May 12 poll, with 329 parliamentary seats up for grabs."  AFP explained that the nearly 7,000 candidates includes 2014 women.  THE SIASAT DAILY added, of the nearly 7,000 candidates, "According to the electoral commission, only 20 percent of the candidates are newcomers." Ali Abdul-Hassan and Sinan Salaheddin (AP) reported, "Iraqi women account for 57 percent of Iraq’s population of over 37 million, according to the U.N. Development Program, and despite government efforts to address gender inequality, the situation for Iraqi women has declined steadily since 2003.  According to the UNDP, one in every 10 Iraqi households is headed by a widow. In recent years, Iraqi women suffered further economic, social and political marginalization due to decades of wars, conflict, violence and sanctions."


Six months and counting and no full Cabinet.

Hopefully, most grasp the importance of Ministry of Defense.  Most countries have some form of a Defense Department.

But Minister of the Interior?

In the US, Ryan Zinke is the Secretary of the Interior and he's responsible for the conservation and management of land and resources.  An important job, no question.  But that's not Iraq's Ministery of the Interior.

And the election was six months ago.  When are they going to get around to naming Vice Presidents?

The election was over six months ago.  What's the hold up there?

It's real easy to pretend that this isn't 2010 and it hasn't taken over eight months to form a government.  But that's not really honest.

A partial cabinet is not a cabinet.  There are 22 slots and only 14 have been filled.  That's eight vacancies.  Then there are the posts of vice president (Iraq has three) and they're empty.

Why is anyone pretending that this is (a) normal or (b) a functioning government.

All this time later, they still don't have a full Cabinet.  BASNEWS reports:


After over three weeks of establishing a new government in Baghdad, the Iraqi Shi'ite factions have not yet agreed to have one sole nominee for the position of interior ministry, reports said.
According to Iraqi media reports, the Alliance of Reform and Building, which consists of Muqtada al-Sadr’s Sa'eroun, Haider Abadi’s Victory and 16 other political groups, cannot agree with the al-Bina Coalition, led by Hadi al-Amiri and Nouri al-Maliki as the latter insists on nominating Falih Fayaz, a former Hashd al-Shaabi official and Iraq’s national security advisor.
Earlier the year, Abadi dismissed Fayaz from the post of national advisor, arguing that the official cannot hold a political and military position simultaneously, while Sadr is determined to not give ministerial posts to people who have previously held such positions.

Nor any efforts to meet the demands of the protesters in Basra.  This weekend did see the assassination of protest leader Wissam al-Ghrawi -- but that doesn't appear to have lit any fired under prime minister Adil Abdul al-Mahdi.

But he does appear frustrated and BASNEWS notes he's making threats:

Iraqi PM Adil Abdul-Mahdi's threatenings to resign from his position, due to political confrontations among the parties over ministerial posts in his government, is "not just words", a Kurdish lawmaker said on Saturday.
Abdul-Mahdi has lately started to threaten to step down if the factions continue disputes in the process of concluding the new cabinet in Baghdad.
"Abdul-Mahdi's threat is, in part, [intended] to get the political factions to arrive at a deal to complete his cabinet," of which "eight ministries have not been voted on," Hoshiyar Abdullah, head of the Change Movement (Gorran) bloc in the Iraqi parliament, told Kurdistan 24.


All this time later, Iraq remains a mess.  So much for the illegal war that was supposed to be about 'liberation' and 'freedom' and 'democracy.'

Back then, you may remember the lies, it would only be days before he would name the rest of the Cabinet.  But then the weekend passed and it was going to be the upcoming Tuesday and then that passed and . . .

22 days later and he still hasn't gone beyond the 14 Cabinet members.

He can't form a Cabinet, how's he going to lead a country?


Poorly and that's apparently what the US government wants from Iraqi leaders -- learned helplessness so that the US can continue to occupy Iraq.


Prashant Rao covered Iraq for AFP.  Let's note a story he shared this month in a series of Tweets.


As he is now out of office, thought I'd share my @DanaRohrabacher story, starring myself, @timcraigpost and the Baghdad press corps... 1/n
1 reply5 retweets9 likes

In June 2011, Rohrabacher was part of a Congressional delegation visiting Iraq. After meeting with Iraqi officials, he led a news conference with Iraqi and foreign media at the US Embassy.
1 reply0 retweets0 likes

Prashant Rao‏Verified account @prashantrao
He started out by saying he met with the then-prime minister, Nuri al-Maliki, and had raised a subject close to his heart. I assumed he would then talk about the safety of US soldiers (there were around 45,000 in the country at the time), or something similar.
5:45 AM - 9 Nov 2018
1 reply0 retweets0 likes

Instead, he said this:

I was totally floored. When the time came for him to respond to questions, I think I got the first one and asked some version of "Ummmm...what?" (For the record, he declined to give specifics)
1 reply0 retweets0 likes

Later in the news conference, @timcraigpost, who was sitting next to me, raised his hand to ask a question. Rohrabacher said he couldn't, because he had already asked one. I piped up to say, no, that was me. (Rohrabacher replied that he confused us because we both had beards.)
1 reply0 retweets0 likes

In the end, Iraq said Rohrabacher and his delegation were no longer welcome in the country (because of the repayment comments, obviously) edition.CNN.com/2011/world/mea…
1 reply0 retweets1 like

(Tim and I took a photo outside the embassy, so you can judge for yourself if we look alike)

Back to today, the US government hasn't said a word about the assassination of Wissam al-Ghrawi -- have you noticed that?

Wissam al-Ghrawi was a prominent figure in demonstrations demanding clean water and reliable electricity in the southern Iraqi city. Basra province generates more than 90 percent of Iraq’s oil exports but suffers from contaminated drinking water and regular blackouts.
Basra police say al-Ghrawi was shot and killed in front of his house in the city center by unknown assailants late Saturday.
[. . .]
“Why was Sheikh Wissam al-Ghrawi killed? Because he asked for clean water? Because he asked for jobs for the unemployed? Is this the price he paid for defending his country?” said civic activist Mohanad al-Ghrawi, a distant relative of the deceased cleric.

Al-Ghrawi is at least the second activist to be killed in what appeared to be a targeted assassination since protests swept Basra last summer. One of the organizers, Soad al-Ali, was killed by a gunman in September, after protesters began directing their ire toward Iran, which they saw as exerting undue influence over national politics.

Johnny‏ @john_taylor87 Nov 20
Replying to @IntellFusion
On September 25, a female human rights activist in Basra was gunned down and murdered in broad daylight. Ms. Saad al-Ali had played a significant role in September’s anti-government protests in Basra. Her husband was wounded in the attack.
0 replies0 retweets0 likes


Azhar al-Rubaie (ARAB WEEKLY) aobserves the attacks on the protesters:

Security forces that arrested protesters did not appear to have the proper paperwork from the courts.
“They did not show an arrest warrant or any other legal document to justify my arrest,” said Mahdi Salah, 26, who said he had been detained in July for six days by the Iraqi Security Forces.
“During the investigation process, they lashed me with a black rubber pipe, punched me on the face and other parts of my body but their torture and ill-treatment did not prevent me from going back to the protests again,” he said.
“The investigator asked me a lot of personal and religious questions, not related to protests. For instance, they asked me ‘How many Shia imams are there’ and ‘Are you Sunni or Shia?’” Salah said.
Loudia Raymond, 24, a Christian activist from Basra, said she does not feel safe in the oil-rich southern city.

“The policeman who was standing in front of a Basra governorate building asked me why would a Christian protest,” Raymond said. “Because of militias, Basra is not safe at all, for Christians in particular. Thousands of Christians fled Basra on the last ten years for security reasons.”