"Even It Up."  We played that in high school band -- our teacher was a big Heart fan.  I was pretty good in band, always first chair.

But while I am a Ann Wilson, I am not the Ann Wilson.  I do love the Ann Wilson of Heart.  So when anyone e-mails asking, it always makes me smile.  My husband Cedric provided me with the Wilson in my name.  Ann was born Ann Wilson.

Look at THE COMMON ILLS today, I saw these:

I did not know Ann Wilson had a new solo album.  This is her third and it's called Fierce Bliss.  And Heart's hitting their 50th anniversary shortly and Ann teased on The Kelly Clarkson Show that Heart has something planned to celebrate.  Right now, though, she's touring behind her new solo album.

I'm trying to find tour dates but I can't.  I tried to find Instagram but could just find it for Heart.  Her own site seems down at the moment and the Heart site doesn't note her solo.  This is from her Twitter feed. 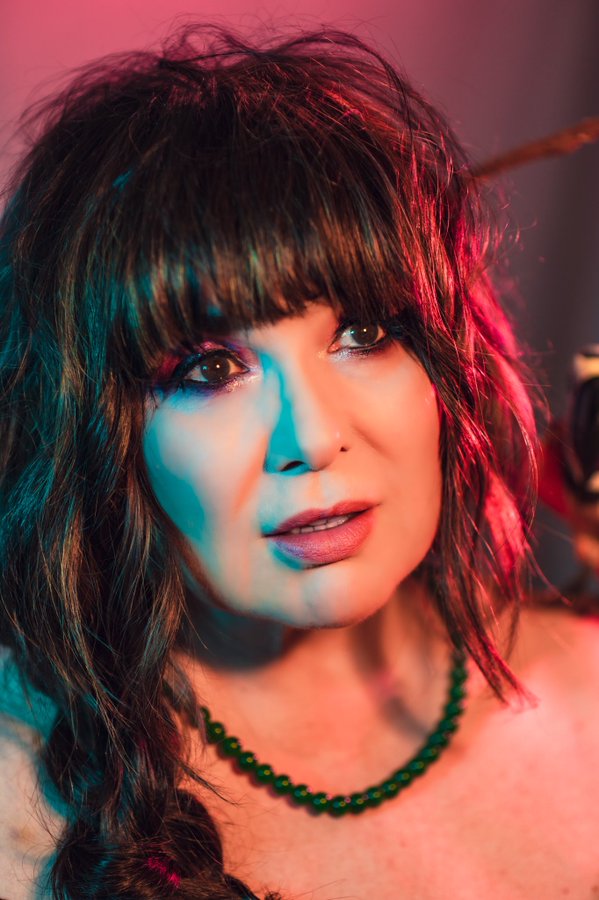 That's a really nice picture of her.  She's always had an amazing voice -- one of our great singers -- but I don't think she ever got credit/attention for her eyes.  Some people's eyes are just soulful and seem to speak words.  She's one of those people.

I hope to find some tour dates and post those next time.

Thursday, June 2, 2022.  As the US economy continues to suffer, Joe /Biden wants to again give more money to Ukrainel
The website BREAKING DEFENSE asks, "Iraq says its spending big on artillery and jets. Can it afford them?"   With so few jobs to be found that protests have already started this time of the year, with so many Iraqis living in poverty, even more living in poverty conditions because of the lack of basic public services (potable water especially this time of year), there are many reasons to ask that question.
Sadly, BREAKING DEFENSE's only concern is whether or not the US defense industry is going to get paid on time.
Rest assured, provided the crooked politicians don't steal everything  -- the way they usually do -- payment should not be an issue.
IRAQI NEWS reports:

The Iraqi Ministry of Oil revealed on Wednesday the initial statistics of its exports of crude oil and the revenues of May 2022.

In a statement issued by the Iraqi Ministry of Oil, the State Organization for Marketing of Oil (SOMO) which is the Iraqi national company responsible for marketing Iraq’s oil, exported more than 102.3 million barrels of crude oil with revenues exceeded 11.43 billion US dollars.

So excited about $100 barrel oil, they're gearing up for two new wells as well as speculation that they might overtake Saudi Arabia as the world's largest oil producer.
An yet the people live in poverty.  The month of May saw oil revenues of $11 billion in US dollars and yet the government cannot take care of its own people.  The World Bank estimates that there are 40 million people in Iraq. There is no reason, when you factor in the oil revenues, that every Iraqi shouldn't be living high on the hog.  But that is not the case.
The corruption is so immense that Iraq still can't pay its bills.  THE NATIONAL explains:

Iraq has failed to pay $1.6 billion owed to neighbouring Iran for gas imports, which is needed to guarantee further supplies and prevent worsening power cuts, Baghdad authorities said on Wednesday.

Payment of the debt was a vital requirement to ensure energy supplies were available for Iraq's power plants during the intense heat of the summer months, when electricity demand surges as people seek to keep cool.

The failure to pay comes as Iraq’s oil revenue imports reached another record high. Iraq's revenue reached $11.436 billion in May and has surpassed $10bn every month since March.

Let's stay with oil for a moment because record prices impact not just the seller but also the buyer.  Nick Beams (WSWS) reports:

Jamie Dimon, the chief executive of America’s largest bank, JPMorgan Chase, has warned that an economic “hurricane” is about to hit the US because of the war in Ukraine and the tightening of monetary policy by the US Federal Reserve.

Two weeks ago, Dimon warned of “storm clouds” gathering over the US economy. He escalated that assessment at a financial services conference yesterday.

“I said they’re storm clouds, they’re big storm clouds here. It’s a hurricane. That hurricane is right out there down the road coming our way,” he said.

“We just don’t know if it’s a minor one or Superstorm Sandy [the devastating hurricane of 2012] … And you better brace yourself,” he told investors at the conference.

He warned the Ukraine war would continue to put upward pressure on oil prices, which could go to as high as $150 or $175 per barrel. At present oil is over $120 after a spike following the decision by the European Union to ban seaborne oil imports from Russia as part of its tightening sanctions regime.

Dimon warned that oil prices would continue to rise over the longer term.

Joe sent all our money to Ukraine and now we suffer. You know what, Joe, you pay your own bills first before you dig into the family funds for charity.

The US Bureau of Labor Statistics says we are now paying 7.6% more food than this time last year. Thanks, Joe.
For months, as Americans have suffered, US President Joe Biden has been giving money to Ukraine.  He just did a forty million dollar package.  But it's another month and it's time for Joe to give away more American tax dollars while the American people continue to suffer.  From the US Defense Dept:

Attributed to Pentagon Deputy Assistant to the Secretary of Defense (Media) Todd Breasseale:

Today, June 1, the Department of Defense (DoD) announced the authorization of a Presidential Drawdown of security assistance valued at up to $700 million, tailored to meet critical Ukrainian needs for today’s fight. This authorization is the eleventh drawdown of equipment from DoD inventories for Ukraine since August 2021.

Capabilities in this package include:

The United States has now committed approximately $5.3 billion in security assistance to Ukraine since the beginning of the Biden Administration, including approximately $4.6 billion since the beginning of Russia’s unprovoked invasion on February 24. Since 2014, the United States has committed more than $7.3 billion in security assistance to Ukraine.

The United States also continues to work with its Allies and partners to identify and provide Ukraine with capabilities to meet its evolving battlefield requirements.

Barack, Joe, Victoria Nuland and others overthrew the duly elected leader of Ukraine in 2014 and they've been stealing US tax dollars to keep the Nazis they backed in place.  Alexander Rubinstein (MP) notes:

As the United States undergoes a national mourning process over a spate of mass shootings, American white nationalists with documented histories of violence are attaining combat experience with advanced US-made weapons in a foreign proxy war.

That’s according to the Department of Homeland Security, which has been gathering intelligence on Americans who have joined the ranks of the more than 20,000 foreign volunteers in Ukraine.

The FBI has indicted several American white nationalists associated with the Rise Above Movement after they trained with the neo-Nazi Azov Battaliion and its civilian wing, the National Corps, in Kiev. But that was almost four years ago. Today, federal law enforcement has no idea how many US neo-Nazis are participating in the war in Ukraine, or what they are doing there.

But one thing is for certain: the Biden administration is allowing the Ukrainian government to recruit Americans – including violent extremists – at its embassy in Washington DC and at consulates across the country. As this report will show, at least one notorious extremist fighting in Ukraine has received extensive promotion from mainstream media, while another who is currently wanted for violent crimes committed in the US was mysteriously able to evade FBI investigators looking into war crimes he previously committed in Eastern Ukraine.

According to a Customs and Border Patrol document released thanks to a May 2022 Freedom of Information Act request by a nonprofit called Property of the People, federal authorities are concerned about RMVE-WS’s, or “racially-motivated violent extremists – white supremacy” returning to the US armed with new tactics learned on the Ukrainian battlefield.

“Ukrainian nationalist groups including the Azov Movement are actively recruiting racially or ethnically motivated violent extremist white supremacists to join various neo-Nazi volunteer battalions in the war against Russia,” the document states. “RMVE-WS individuals in the United States and Europe announced intentions to join the conflict and are organizing entry to Ukraine via the Polish border.”

The document, which was drafted by Customs and Border Protections, the Office of Intelligence, and other Homeland Security sub-agencies, contains write-ups of interviews conducted by law enforcement with Americans en route to Ukraine to fight Russia.

In her latest at BLACK AGENDA REPORT, Margaret Kimberly observes:

On May 24, 2022 a gunman entered a school in Uvalde, Texas and killed 19 children and 2 teachers. The cycle of thoughts, prayers and pretend action continued but was even worse because of the short span of time between the two events and revelations about police action, or rather inaction, in Uvalde.

Democratic Senator Chris Murphy of Connecticut won kudos for his particular act of pretense on the senate floor. Murphy’s performance was a bit over the top but that is probably why it garnered so much attention. The senator seemed to be on the verge of tears as he made an impassioned plea to his colleagues. “What are we doing? … Why are we here? …This only happens in this country and nowhere else. … Nowhere else do kids go to school thinking they might be shot that day. …  I’m here on this floor to beg - to literally get down on my hands and knees and beg my colleagues. Find a path forward here.”

Those are fine words from Murphy until one considers that on a regular basis he advocates U.S. violence all over the world. In December 2013 he joined his colleague John McCain in Ukraine. They attended a rally hosted by the neo-Nazi Svoboda party which was dedicated to overthrowing the elected president. The ensuing violence after the coup killed 14,000 people in the region that opposed the U.S. backed government.

Murphy has been particularly vicious in his efforts to undermine the elected government of Venezuela . “Maduro is evil, and the U.S. should pursue a strategy to undermine him and prompt new elections. No one can defend what he has done to Venezuela. But it’s quite a different thing for the U.S. to incite a civil war with no real plan for how it ends.”  Sound(Ssound familiar?).” Murphy supports the sanctions that have killed thousands of Venezuelans and very publicly defended overthrowing that government too, just as he did in Ukraine. The overly dramatic senator should be asked hard questions about the violence he espouses.

Let's wind down with this from The Green Party of Michigan:
The following sites updated:
on June 02, 2022 No comments: