Wednesday, I wrote "Good for Kim Kardashian" and meant it.  I thought a lot of other people would be sharing similar thoughts but I've only found one person.

jeremy scahill Retweeted Kim Kardashian West
How many people making fun of Kim have spent any time advocating for prisoners? She is raising issues that get almost zero coverage. We need more high profile people speaking out on harsh sentencing and advocating for its victims.
jeremy scahill added,

Kim Kardashian WestVerified account @KimKardashian
I would like to thank President Trump for his time this afternoon. It is our hope that the President will grant clemency to Ms. Alice Marie Johnson who is serving a life sentence for a first-time, non-violent drug offense.
417 replies996 retweets4,566 likes

Anything done for Alice Marie Johnson is worthwhile as far as I’m concerned. She’s stuck in there, can’t hug her kids or her grand babies. Makes me sick. Obama should have commuted her sentence and I really hope Trump does.
2 replies20 retweets114 likes

I am honored to accompany @KimKardashian to The White House today to advocate on behalf of Alice Marie Johnson. Kim has spent her time, money & energy for this incredibly worthy cause. Please give credit where credit is due.
20 replies135 retweets348 likes

And for more on Alice Marie Johnson:

Friday, June 1, 2018.  So many shade the truth -- the UN when it comes to the monthly deaths in Iraq; NYT and it's Hobby Lobby journalist who announce they're returning stolen items to Iraq out of the goodness of their little old hearts when, in fact, the are returning the items because the Iraqi government has ordered them returned.  Ayi-yi-yi.  Let's get started.

With the start of a new month, the United Nations celebrates with yet another undercount of the deaths in Iraq.

UNAMI Retweeted UNAMI
#Baghdad was the worst affected Governorate, with 117 civilian casualties (45 killed, 72 injured), followed by #Diyala with 9 killed and 35 injured, and #Kirkuk with 20 killed and 16 injured. #Iraq
UNAMI added, 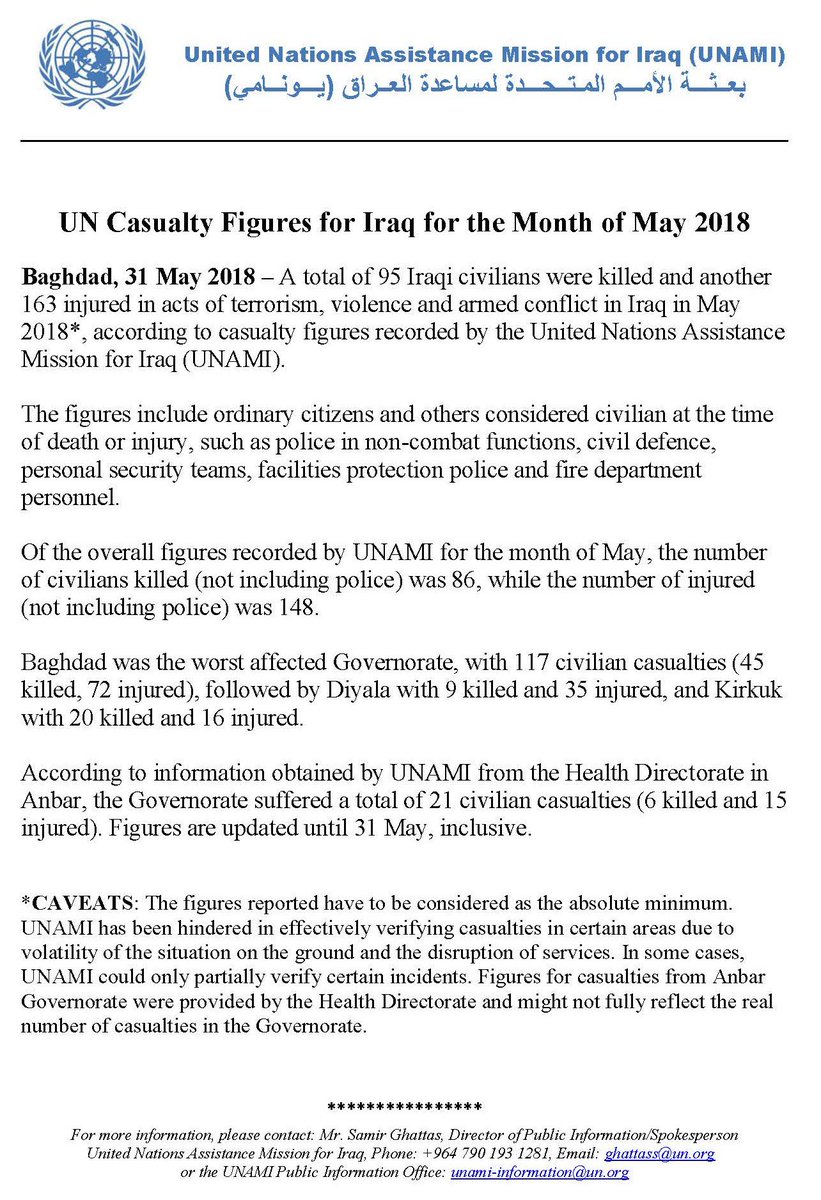 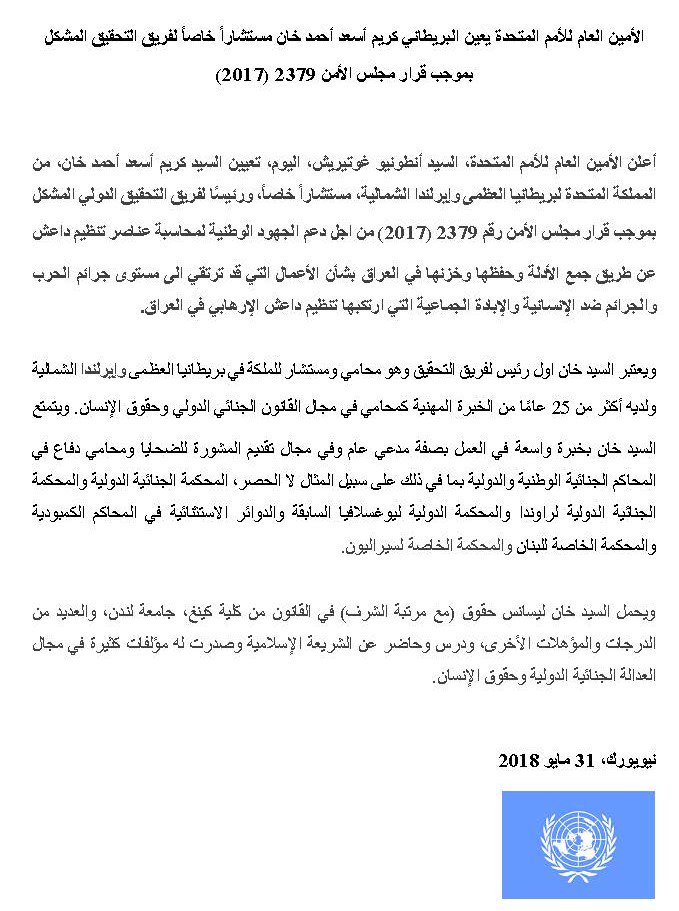 Back in the real world, Margaret Griffis (ANTIWAR.COM) notes, "At least 1,906 people were killed or found dead, and 265 more were wounded during violent attacks in May. The number of casualties is close to April’s figures, when 1,970 were killed, executed, or recovered. Another 194 more were wounded then. These figures should be considered estimates, as the true number of casualties is impossible to know."

I can't believe that twenty or so years from now, the UN undercounts will enhance the body's image or reputation.  No one should allow them then to dismiss their actions.  It should always be remembered that they were called out in real time -- that it was known in real time that they were dishonest.  Dishonesty helps perpetuate the war.  That wasn't a concern for the UN.  But they were happy to change their counts anytime they were criticized by the Iraqi government -- changes that repeatedly lowered the count.

The U.S. media quickly dismissed the results of Iraq's national elections on May 12. Journalists were puzzled by what the followers of Muqtada al-Sadr and the Iraqi Communist Party (ICP) might have in common, and even more, by why they garnered more Iraqi votes than any other electoral list.Al-Sadr's Mahdi Army fought the U.S. early in the occupation, and his political base is mostly among poor and disenfranchised Iraqis, especially in Baghdad's Sadr City. This vast neighborhood of 3.5 million people, half the population of Baghdad, was known originally as al-Thawra, or Revolution, built for poor people migrating from the countryside by radical nationalist Prime Minister Abdul Karim Qassim in 1959. For many years it was a stronghold of the ICP. Later, after the Baathist coup that overthrew Karim Qassim and eventually brought Saddam Hussein to power, it was renamed Saddam City. Then, after the 1999 assassination of Muqtada al-Sadr's father, Ayatollah Mohammad Sadeq al-Sadr, it became popularly known as Sadr City.The New York Times labeled Muqtada al-Sadr's partners in the Sairoon coalition "Iraq's moribund Communists, Sunni businessmen and pious community activists." Actually, besides al-Sadr and the ICP, Sairoon (meaning Forward or the Alliance for Reforms) includes the Youth Movement for Change Party, the Party of Progress and Reform, the Iraqi Republican Group, and the State of Justice Party.Oversimplifying politics and ignoring history, however, is not just a matter of names. It reveals blindness to the long process in which Iraqi civil society has been rebuilding itself, to the popular anger that has motivated this, and to the growing support for the political alternative this alliance proposes.The 329 parliamentary deputies chosen in the May election will vote for a new prime minister. Sairoon won the most 55 deputies, with 1.3 million votes. It was followed by the Fatah Party of Hadi al-Amiri, whose base rests on militias with ties to Iran, with 47 seats and 1.2 million votes. Voters rejected the parties of both the current Prime Minister Haidar al-Abadi (Victory Coalition with 40 seats) and former Prime Minister Nouri al-Maliki (State of Justice Party with 25). Turnout was low, at 44% nationwide and only 33% in Baghdad itself (where Sairoon won 23%, almost twice that of any of its rivals).The program of the Sairoon alliance calls for an end to the system that divided political positions and government support along sectarian lines, a system imposed by the U.S. after its occupation of Iraq in 2011. Basing a governmental structure on sectarian political parties led to a system of patronage and division of spoils, and consequently enormous corruption. Al-Sadr explained, "I'll say this despite the amama [turban] on my head. We tried the Islamists and they failed miserably. Time to try independent technocrats."Sairoon also called for independence from foreign domination by the U.S. and Iran. In advance of the election, a senior Iranian politician, Ali Akbar Velayati, visited Iraq and threatened Iranian reprisals if voters chose Sairoon: "We will not allow liberals and communists to govern in Iraq," he said. Many secular politicians condemned the statement as interference in Iraq's internal affairs.Following the election, because no group got anywhere near a majority, negotiations began between Sairoon and two runners-up, al-Amiri's Fatah bloc and al-Abadi's Victory Coalition. Inside Sairoon this has produced tension between the Sadrists and the ICP. Some coalition members are calling for it to go into opposition rather than agree to power-sharing with parties and politicians still committed to the hated sectarian quotas.

The programme of Chiite religious leader Moqtada al-Sadr is simple – the withdrawal of all foreign presence (except diplomatic), whether from the the USA, Turkey or Iran. Without taking into account what might become of the Turkish troops illegally stationed in Bachiqa, and aware of the fact that the Iranians have no need to send troops into Iraq in order to be represented there, this message is addressed in priority to the 100,000 US personnel still present, a fifth of whom are regular soldiers.
The other message of Moqtada al-Sadr – who is supported by the Communist Party – is the end of sectarianism. It appears that Iraqis have assimilated the idea that in the absence of a despotic régime like that of Saddam Hussein, only national union can enable the defence of the country. This is why, before the vote, Moqtada al-Sadr turned to Saudi Arabia and to the other Sunni powers in the Persian Gulf. He describes himself as a nationalist in the sense of original Ba’athism – not as an Iraqi nationalist, but as an Arab nationalist.
It is also the reason why voters did not offer massive support to the Prime Minister’s « Victory Alliance ». By referring to his victory over [the Islamic State], Haider al-Abadi rejected the ex-Ba’athists who had supported the terrorist organisation by default [2].
The propaganda broadcast by the Bush administration had assimilated Saddam Hussein’s Ba’athists with the Nazis. Washington had qualified the Iraqi Ba’ath Party as a « criminal organisation » and forbade its members from taking part in politics. Fifteen years later, this decision is still the primary cause of the troubles which destabilise the country. To that we must add the sectarian constitution, drawn up by the Israëlo-US Noah Feltman and imposed by the Pentagon, which maintains the fear of the division of the country into three distinct States (Chiites, Sunnis and Kurds). In any case, the time has passed when the CIA could organise civil war in secret and channel anti-US anger into communitarian persecution.


We said earlier this week of the elections that so-called 'experts' in the west forgot the reality that all elections are local.  CSIS' Anthony Cordesman gets at that in his analysis:

The U.S. has largely abandoned efforts to help Iraq develop and improve its governance since 2011, but Iraq's civil development raises equally important issues. Since late 2013, U.S. strategy in Iraq has focused on the threat from IISS, Iranian influence and the internal divisions between Iraq's sectarian and ethnic factions. It has focused on fighting ISIS and rebuilding Iraq security forces. The Iraqi election, however, has highlighted the fact that the near defeat of ISIS has led Iraqis to focus on their own internal concerns, the economic problems they face, the poor performance of the government, the lack of national unity, and the corruption and self-seeking nature of much of Iraq's political leadership. Civil issues have become as important as security ones, and no policy or strategy towards Iraq that ignores its civil side, and emphasize security alone, can succeed.
You can access the complete report here.

Some statistics on the elections.


New statistic from Iraq's elections. Here's the return rate of the 329 parliament members:

Of those numbers, RUDAW reminds, "Prior to elections, Ayatollah Ali al-Sistani, the highest religious authority for the Shiites in Iraq advised his countrymen not to choose those who have already been tried."


Now a new development about Rukmini Callimachi and her trashy ways.  We long noted the 'journalist' for THE NEW YORK TIMES was worse than Judith Miller.  More recently, we've taken to calling her the Hobby Lobby of journalists after she stole thousands of documents.


The paper of no record can't afford anymore criticism so they've announced they will return the stolen documents.  ALJAZEERA reports:


The New York Times plans to return thousands of documents its journalists "recovered" from Iraq.


The newspaper, which came under fire for removing the documents from the country, also said it would digitise the files and make them available to the public.


According to a statement on Thursday, NYT correspondent Rukmini Callimachi, who has been covering the Islamic State of Iraq and the Levant (ISIL, also known as ISIS), noted that the newspaper is "seeking a partner to digitize" the documents and make them publicly available online.
Before you think everything's now going to be alright, this is THE NEW YORK TIMES so there are still problems.


NYT conceals the ID of the perpetrator but publish the biographical information of the victims. Aren't Iraqi civilians worthy of the same kindness the NYT bestows onto ISIS? The ISIS files are in the hands of reckless journalists & must be returned to Iraq
6:23 AM - 31 May 2018


Also, this is NYT so it turns out that they got their (own) story wrong.  They didn't just decide to return it, they were ordered to by the Iraqi government:

I've obtained a letter from Iraq's National Intelligence Service requesting that the @nytimes returns the 15,000 "ISIS Files" illegally seized and smuggled out of #Iraq by @rcallimachi and her team.

NYT said today that they plan to "donate" the files back to Iraq.


Good think they eliminated their public editor post -- that could've made for a messy column.