That grand dragon would be Rachel Maddow. She really destroyed her career with non-stop lying about Russia.

Chandler Bling‏ @TREErenceMalick 40m40 minutes ago
Rachel Maddow is all fake smiles as she tries to claim the Russia "bombshell" wasn't a big fat nothing burger. I almost feel bad for her, but this is what happens when you waste TWO YEARS ignoring real issues hurting Americans. 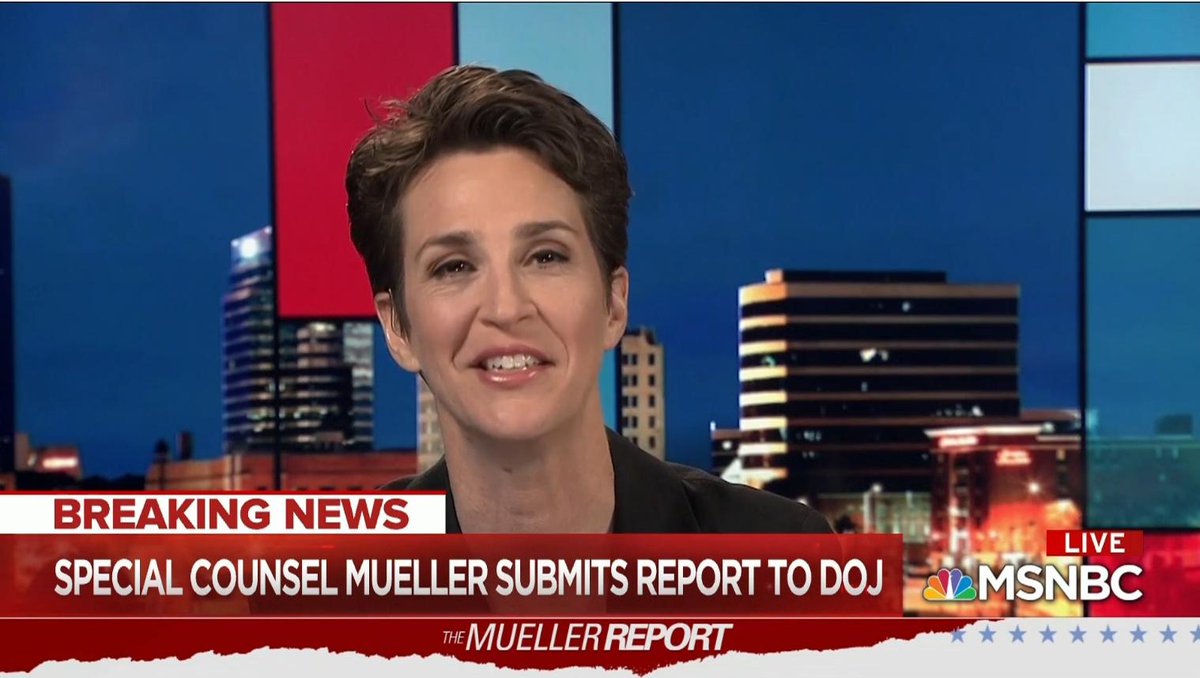 Michael Tracey‏Verified account @mtracey 13h13 hours ago
If the Mueller report exonerates Trump, Rachel Maddow is going to do that night's show in black funeral attire and her producers will have to provide her fresh kleenexes throughout. By the 30-minute mark she'll start babbling incomprehensibly and need to be carted off the set
146 replies217 retweets952 likes


She is the Jussie Smollett of the 'news' media.

Ajamu Baraka‏Verified account @ajamubaraka 2h2 hours ago
Ajamu Baraka Retweeted POLITICO
Don't be confused. Everyone knew there was no collusion with Russia, that was not the point. The objective was to use Russiagate to strengthen repressive state apparatus & ensure Trump didn't really threaten interests of finance capital & transnationals.
Ajamu Baraka added,
POLITICOVerified account @politico
Democrats immediately renewed their demands to make Robert Mueller's report — and the evidence it is based on — public as quickly as possible, warning that there would be consequences if the White House attempts to censor or manipulate it https://politi.co/2JAhXVS
20 replies195 retweets391 likes


The death toll has continued to rise in the ferry sinking yesterday in Iraq.  Less than a half hour ago, Hamdi Alkhshali, Nada Altaher and Tamara Qiblawi (CNN) updated the death toll to 92 and they note, "Among the victims were at least 12 children, according to health ministry spokesman Saif al-Badr. Of the nearly 150 people who were on board, about 60 are missing, said Mosul Mayor Zuhair al-Araji."


Heartbreaking! CCTV camera shows the moment the ferry, carrying more than 150 people, capsizes in #Mosul. At least 90 peope are dead and more than 20 are missing. 54 people were rescued. #Iraq


REUTERS reveals that the pleasure cruise turned deadly was supposed to take the passengers on board "to a man-made island used as a recreational area by families" and quotes Mosul's Civil Defense Authority Husam Khalil stating the boat "can normally carry 50 people.  There were 250 on board before the incident."


So according to the safety guidelines, those ferries cud actually hold up to 50 persons not over 100! Welcome to Iraq, where money matters more than human lives

The flat-bottomed boat, which operates from a platform at an amusement park in the once Islamic State-controlled city of Mosul, capsized, throwing hundreds of passengers in the river near the shore. Many people couldn't swim.
Mosul Mayor Zuhair Araji said the vessel had "reached its capacity," causing it to succumb, according to Kurdistan24.
The mayor says he had warned the owners last week that the boat needed repairs.
The vessel did not appear to have life vests on board, according to authorities.

And the water level had also reportedly risen in recent days from rains, snow melting off nearby mountains and developments at the Mosul dam. Authorities had alerted people to be cautious.

When money is worth more than peoples lives! #Mosul #Iraq


Farid Abdulwahed and Qassim Abdul-Zahra (AP) add, "An Interior Ministry official said 94 people were killed in the accident, which residents said was the worst in recent memory. The official spoke on condition of anonymity in line with regulations."


So sad: An overcrowded ferry capsized in the Tigris River near Mosul, killing at least 92 people during Nowruz and Mother's Day celebrations on Thursday, officials said. Among the victims were at least 12 children, according to health ministry
2 replies14 retweets14 likes

#Iraqi s lighting candles on Tigris river in #Baghdad and all across Iraq in solidarity with the ferry victims. #solidarity

The Russian government issued the following:

Vladimir Putin conveyed his condolences to the President of the Republic of Iraq Barham Salih over a ferry crash and the loss of human life.

The ferry of Mosul has affirmed that the Iraqi collective mind has been reconstructed out of the sectarian and nationalistic context, leading to new solidarity and interactions in Iraq's social geography. Politicians can not invest in this accident from sectarian perspective.
0 replies0 retweets0 likes

The ferry that yesterday sank in Mosul has provoked the resentment and grief of Iraqi people. The innocents we lost there were victims for the chain of corrupt process hitting Iraqi state. No for corruption.
0 replies0 retweets0 likes

#Barham_Salih president of Iraq in #Mosul


The Iraqi people are still waiting for a government that makes them a priority.  Their anger is both justified and understandable.

In the US, a presidential election will take place in 2020.  Currently, there are six women vying for the Democratic Party's presidential nomination.   This is a record.  Here they are with their three most recent Tweets (we are not counting pinned Tweets).

Ten minutes until @SHODesusAndMero on #SHOWTIME! Don't miss it! 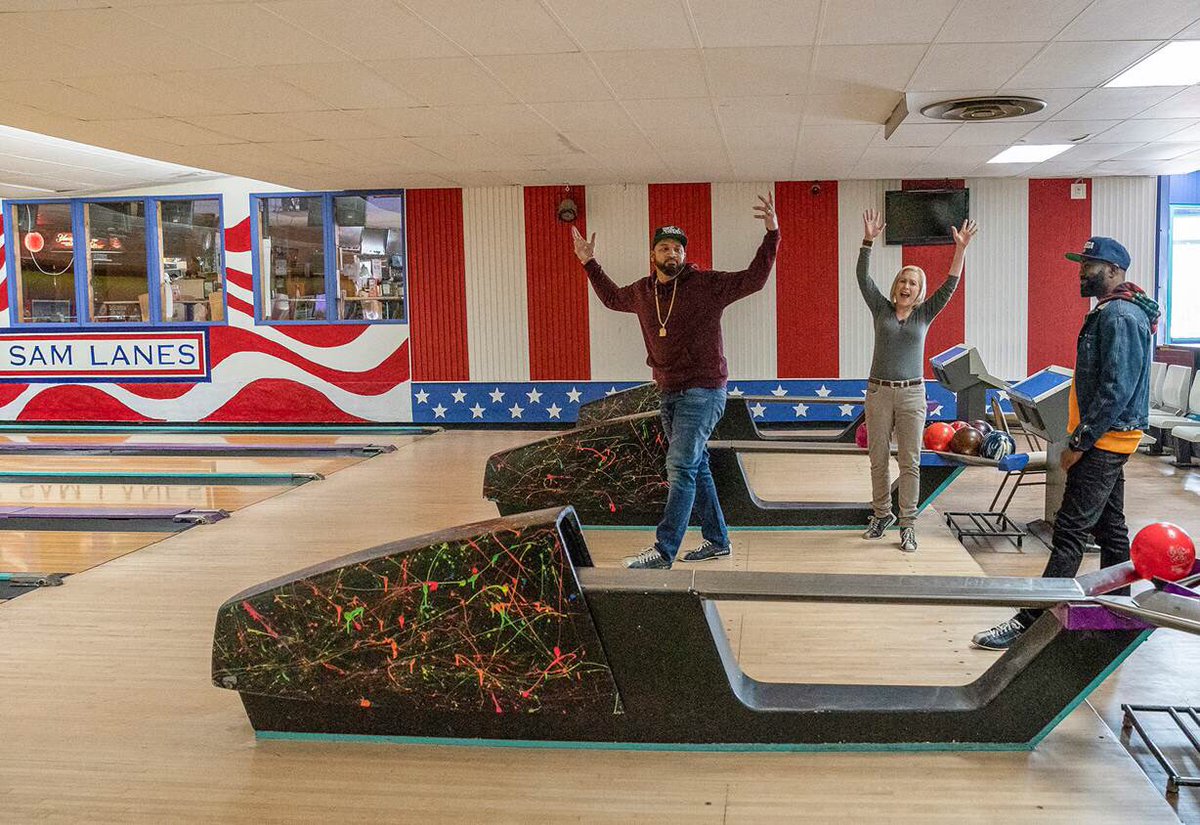 I had the best time showing @desusnice and @THEKIDMERO around Troy, NY and definitely beating them at bowling. Watch @SHODesusAndMero on #SHOWTIME tonight! 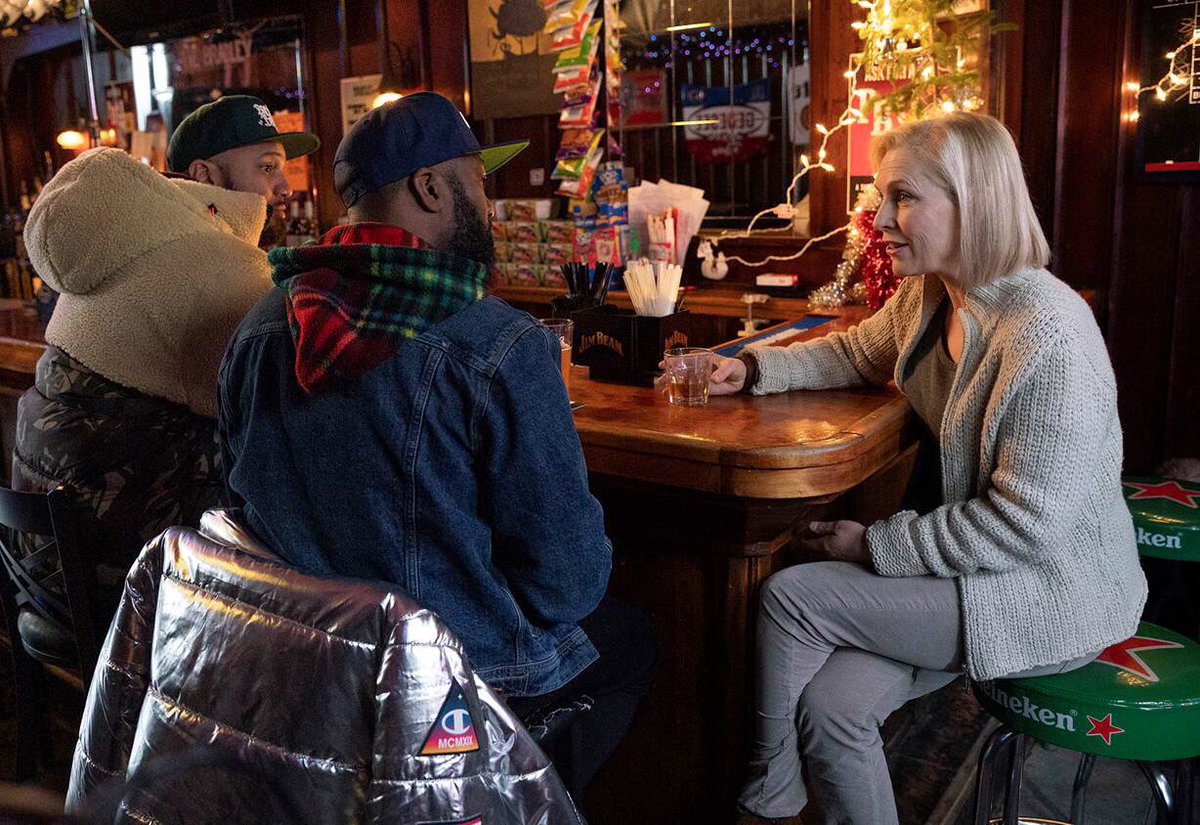 Thanks to so many Iowans who helped us kick off the first week of our official presidential campaign! Be back soon. 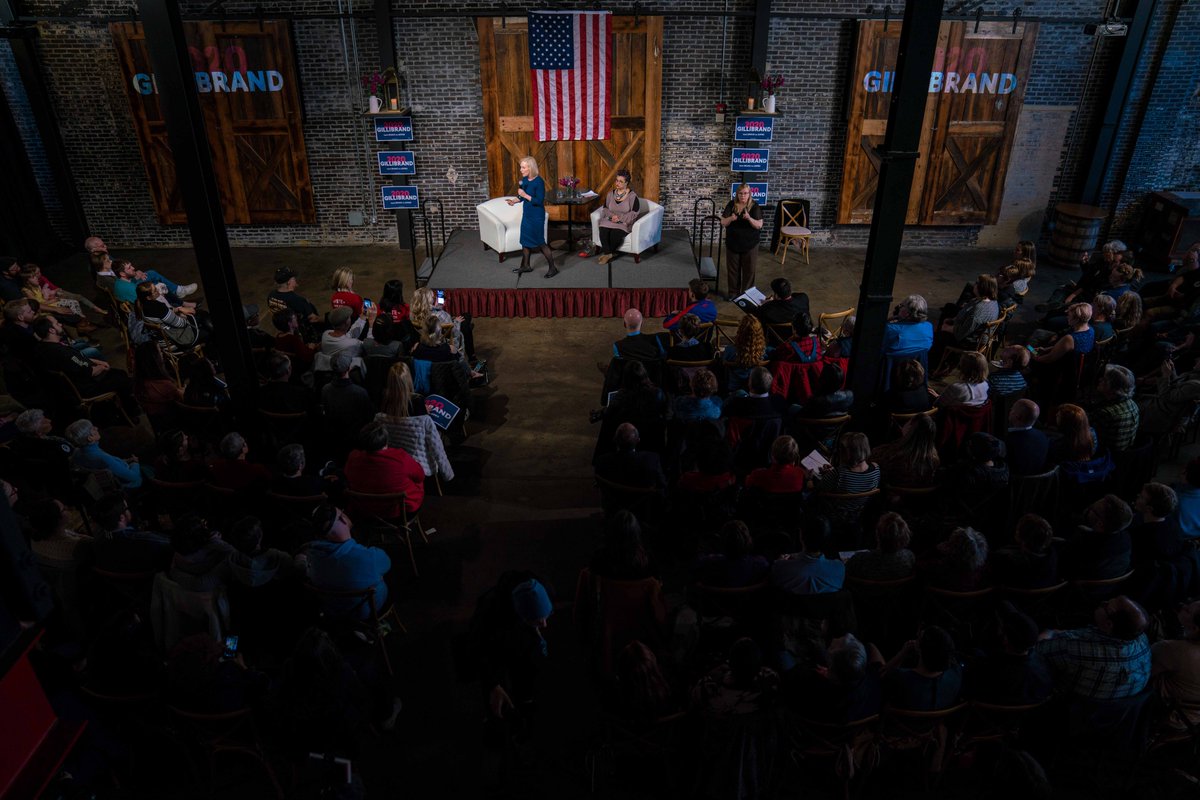 
Education has the ability to empower our children and improve their path in life. We have a responsibility to ensure our teachers are respected, earn dignified wages, and have quality health care, benefits, and every resource they need to do their job.
329 replies1,213 retweets5,606 likes

Kamala Harris Retweeted NBC News
It is unconscionable that Americans across the country have mountains of debt from medical bills. We must address our crumbling health care system and pass Medicare for All.
Kamala Harris added,

Today in 1965, about 3,200 marchers set out to complete the journey from Selma to Montgomery. By the time they reached Montgomery, they were over 25,000 strong. Their determination and courage led to the passage of the Voting Rights Act.
209 replies1,633 retweets7,077 likes

If you'd like to help those affected by flooding in the Midwest, here are several ways to pitch in:
21 replies132 retweets296 likes

It doesn't take an expert in information security to know that this is just sloppy. My bipartisan legislation would make sure that you get to decide what's done with your data and that these companies are held accountable when they mess up.
28 replies197 retweets733 likes

Congrats to the U of M Gophers in the first round of the NCAA! Gophers, Gabe Kalscheur pull off NCAA tournament surprise, beat Louisville in opener.
23 replies51 retweets606 likes


When asked my views on immigration, I let it rip… 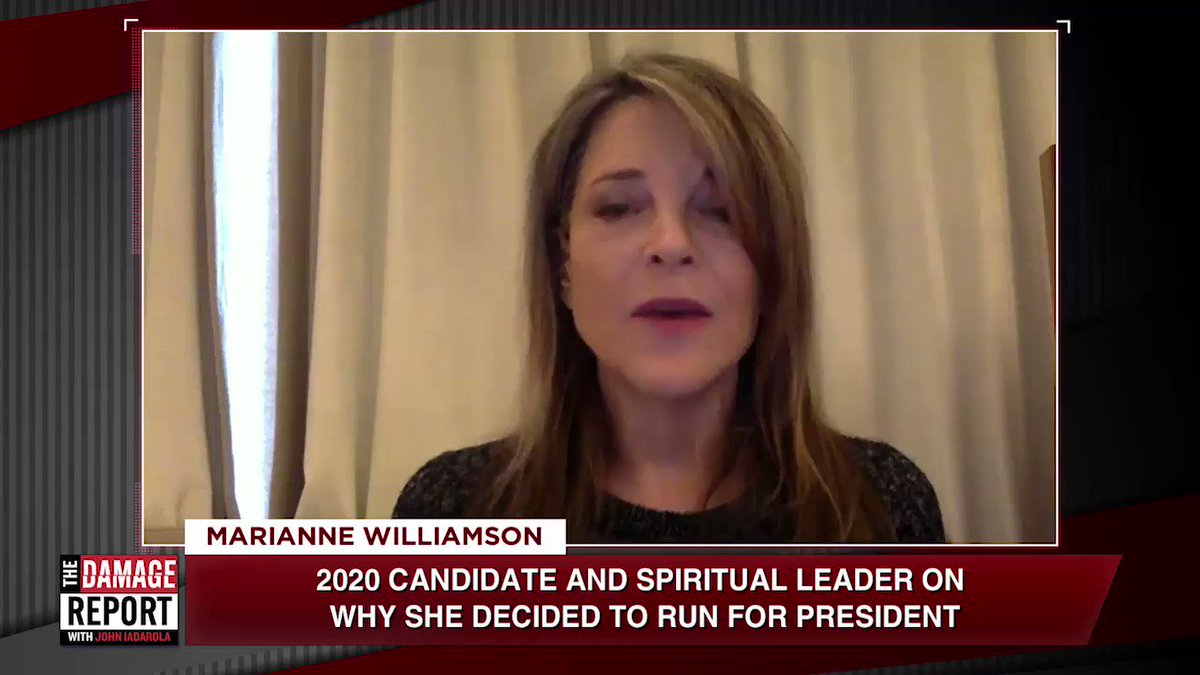 0:35
The Damage Report @TheDamageReport
“We can’t just ignore that millions of American children live in chronic trauma. We can’t just ignore the fact that there’s an underlying racial tension underneath, that needs to be addressed with a plan of reparations for slavery." …
7 replies43 retweets181 likes

Here was my Town Hall with WMUR in New Hampshire ...
4 replies31 retweets90 likes


I’ve said it before, I’ll keep saying it: ban roundup! It’s long past time we stopped relying on corrupt corporations with a profit incentive to fund science telling us their chemicals are “safe.” Victims shouldn’t have to go to trial to get the truth.
6 replies41 retweets131 likes

Tulsi Gabbard Retweeted The New York Times
Another example of Trump and Netanyahu putting their own political interests ahead of the interests of our respective countries. Will escalate tensions and likelihood of war between Israel/US/Syria/Iran/Russia. Shortsighted.
Tulsi Gabbard added,

May the colorful celebrations of Holi around the world remind us all to let go of our bad habits, renew our will to do good, and be kind to one another regardless of our differences.
127 replies595 retweets2,690 likes

.@RepStephenLynch is right: @WellsFargo cheated its customers & broke the law. CEO Tim Sloan should be fired – but instead he got a $1 million raise last year. It's obscene. The only way we're ever going to stop these scandals is to hold executives personally accountable.

When I heard reports that @ActingSecDef Patrick Shanahan may have worked to promote his former employer @Boeing, I took action and investigated. Government officials should work for the people – not big defense contractors.
202 replies585 retweets2,113 likes