The US government killed MLK

That link goes to a very important article about how the government killed MLK.

I'm going to toss out an excerpt:


The King family’s attempts for a criminal trial were always denied by state and federal government. Claimed suspect, James Ray, said that his government-appointed attorney told him to sign a guilty plea to prevent the death penalty and threatened arrests of his father and brother as co-conspirators for his only part in the assassination plot: delivering a rifle. Mr. Ray produced a letter from his attorney stating the promise that Mr. Ray would receive a trial. When Mr. Ray discovered that he was solely blamed for Dr. King’s assassination and would never receive a trial, Mr. Ray’s subsequent recants of his guilty plea and requests for trial were denied.
The US government also denied the King family’s requests for independent investigation of the assassination, despite the overwhelming evidence produced at the 1999 civil trial. Dr. King’s wife, Coretta, spent more than twice the number of years she was married to Martin working to get a criminal trial for her husband’s assassination.
Importantly, the US government has never presented any evidence subject to challenge that substantiates their claim that Mr. Ray assassinated Dr. King.
The King family believes the government’s motivation to murder Dr. King was to prevent his imminent camp-in/Occupy at Washington, D.C. until the Vietnam War was ended and those resources directed to end poverty and invest in US hard and soft infrastructure.
US corporate media did not cover the civil trial, interview the King family, and textbooks omit this information. This is crucial evidence of a controlled corporate media rejecting coverage of a game-changing story.
In a hundred or so years, some president will be brave enough to release the government records and we'll all see that the government killed MLK.

Wednesday, April 4, 2018.  Alissa J. Rubin reports on checkpoints in Iraq, Brett McGurk reveals the real reason Barack Obama started moving US troops back into Iraq in 2014 (it wasn't the Yazidis), and much more.


Oh, the stupidity. We were going to go with Peter Baker but there was a bigger fool on Iraq today.

People treating Laura Ingraham like some sort of free speech martyr didn't seem to mind so much when Phil Donahue lost his show for the crime of being right about the Iraq war.
28 replies450 retweets2,001 likes

People are objecting to a cry baby White boy who shoved his way to the front of the photo op to tear center stage away from students of color only to then throw a tantrum because Larua Ingraham said he was "whining."  Grow the hell up.  And since he can't, broadcasters are being irresponsible by booking David Hogg.  He does not have the maturity to be in public.

Ingraham said he was whining.  For that, her advertisers were astroturffed by Hogg and his followers who don't hold jobs and have all the time in the world to create sock puppets.  Ingraham has done some appalling things.  Saying someone was "whining" is not one of them.  She doesn't deserve to be targeted for this nonsense.

But, more to the point, Schooley, you don't know what the hell you're talking about.  Phil Donahue did not lose his show because he was right about the Iraq War.  The Iraq War had not started.  MSNBC pulled his show because they felt his questioning during war time would come off as unpatriotic.  Should he have lost his show?  No.  And it was a hit show.  But let's not alter reality because you're too lazy to learn what happened, Schooley.

Moving over to THE NEW YORK TIMES, they have re-launched their blog AT WAR and one of the pieces there is by Alissa J. Rubin who returned to Iraq in January and who will have a piece on Iraq in an upcoming NEW YORK TIMES SUNDAY MAGAZINE.  This is from her blog about a three hour trip in Iraq previously was now a nine hour trip due to all the checkpoints:


After the last Kurdish position, everything changed. We were diverted onto a minor road that twisted through the desert scrub of the Nineveh plains. We emerged at a large Iraqi Army checkpoint with cars and trucks parked haphazardly on either side.
A soldier asked if I was a foreigner. Yes, we said.
We were not allowed to pass. At a dilapidated concrete building surrounded by mud and pickup trucks, we were told we could plead our case.
The one dubious comfort was that there seemed to be others waylaid.
We entered a room with scuffed walls. Soiled, sunken couches lay along two sides of the room. There was a large battered desk along the third wall. On the fourth wall was an army cot. The only light came through windows so dirty it was hard to see out. A soldier smoked a hookah pipe.
A man wearing jeans and a leather jacket restlessly paced. He appeared to be in charge. “Papers,” he snapped.
We produced press cards. Looking around, I saw other idled travelers with forms bearing official-looking stamps. The soldier reviewed each form carefully.
He seemed decent enough. He said he would call his supervisor, and if we had permission, we could cross.
We called our bureau in Baghdad. We did have government approval. We asked our office manager to try to get someone with authority to call the checkpoint on our behalf.
We waited. We waited some more. Other travelers came and went. Our office in Baghdad recommended we call local army commanders. We texted, we called, then we pleaded some more with the checkpoint chief. Nothing happened.
I looked at my watch. It had been an hour and five minutes. I turned to Kamil: “What can we do?”
“You know Jabouri, right?” he said.

No, I answered.
Kamil was referring to Gen. Najim Abed al-Jabouri, the Iraqi Army commander in charge of Mosul and the surrounding territory, who had a reputation for being reasonable.
“Even if you don’t know him, why don’t you call him?” Kamil said.
More calls to Baghdad. Jabouri’s number was sent to me. As I typed him a text message, the checkpoint soldier dialed a number on his phone, muttering in Arabic.
Kamil had been watching. He spoke softly to me. “The guy just made a phone call and said, ‘Now they are calling Jabouri, I’m going to let them go.’ ”
An hour and 15 minutes after arriving, we were free. We rushed to our car before anyone of them could change their minds.

Checkpoints are often associated with borders so let's move to that topic.  Yesterday the US Institute of Peace held several talks on Iraq.  The third and final one included a group composed of Brett McGurk (lead US diplomat on Iraq under Barack Obama, also a diplomat on Iraq under Bully Boy Bush and a diplomat on Iraq under Donald Trump who is ending Brett's current position), US Gen Joseph Votel, USAID's Mark Green and noted leaker Stephen J. Hadley.  Votel was the one who stressed the issue of borders and how this involves the US troops.

Because, please note, US troops remain in Iraq.  While you are being distracted, US troops remain in Iraq.   It's amazing that the US press appears to be ignoring the events at the US Institute of Peace because this group is funded by Congress and has a direct pipeline to Congress.  As most participants noted, Congress will be making determinations shortly.  And what the so-called peace event was pimping?  Continued US military presence in Iraq.  This came from USAID's Mark Green.  It came from all of the participants.  But Green, someone who has nothing to do with the military, couldn't stop praising the new civilian and military mixture teams -- who, he insisted, were not duplicating one another's work.  The event was all about selling the war, continuing the war.  Why wasn't the American press interested in covering this DC event?


US Gen Joseph Votel:  We'll-we'll  see a heavy focus on the development of Iraqi border forces. Uh, this will be very, very important. They-they do not want to have a repeat of what happened before. Obviously, ISIS is an organization that operates without regard to borders or boundaries or any, uh, any recognized norm of that sort and so being able to protect their own borders, is, I think is a -- is a key aspect of this. And, along the way, we'll see the coalition forces with the United States continue to provide the support that the government of Iraq has asked of them. And this has been something we've been talking about with them for some time here, so that we do remain in a position where we can continue to help them professionalize, continue to help them develop into the -- into the security force that the Iraqi people need and want to protect them in the future. So uh, in-in Iraq, I think we're in a pretty good place right now security wise. It is -- there still is the presence of ISIS, uh, there's no doubt about that, but I think with the coalition's support, I think the Iraqi security forces are in a pretty good position to begin to address that.


He was not the only one noting (advocating for) the continued US military presence in Iraq at the Institute of Peace.  SPUTNIK notes Iraq's Ambassador to the US, Fareed Yasseen, who declared, "They played a really critical role.  We will continue to need their support and their expertise to fight ISIS in the comping phases where you will have to move from terrain tactics warfare to intelligence, fusion cells, counter-terrorism, things like that."  ALMASDAR NEWS adds, "Moreover, Yasseen said that Iraq would also need the support of the United States to secure its border with Syria."

Again, no matter who spoke, they all joined the chorus of "Keep US Boots On The Ground."

Some sang it a little louder, but they all sang it.

Some did a solo turn or two.  Chief among them?  Brett McGurk.

Why did US troops start going back into Iraq in heavier numbers after the second half of 2014?  To help the Yazidis!

That has been the lie.

The conference cleared that up.  Don't think Brett realized he was doing that, but he did.  He wanted to talk about how they arrived at this recent point in history and he wanted to start with 2014.  He revealed that Baghdad was seriously concerned the Islamic State would seize the city (which everyone already knew) and that, at this time, the US government was seriously exploring evacuating the US Embassy in Baghdad (a detail not previously discussed in the US press), "that's how serious it was."

Not everyone's selling the notion of US troops remaining in Iraq.  The idea is especially unpopular in Iraq.  Shi'ite cleric and movement leader Moqtada al-Sadr continues to call for US troops to leave the country.  Baxtiyar Goran (KURDISTAN 24) reports:


Violence continues in Iraq.  UNAMI released their undercount of violence for the month of March:


UN Casualty Figures for #Iraq for the Month of March 2018 A total of 104 Iraqi civilians were killed and another 177 injured in acts of terrorism, violence and armed conflict in Iraq in March 2018*, according to casualty figures recorded by UNAMI. 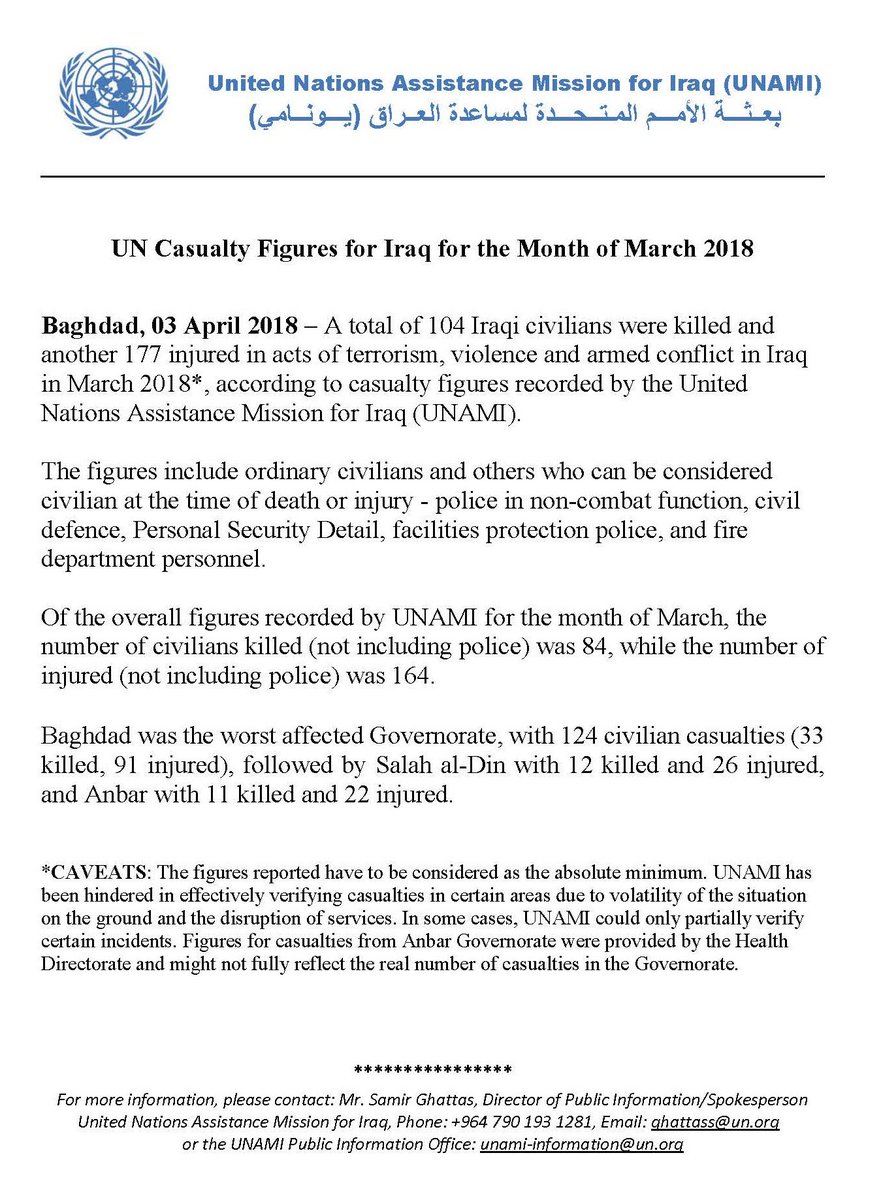