Kate Jackson curses Elizabeth Banks out and bitch slaps her too! 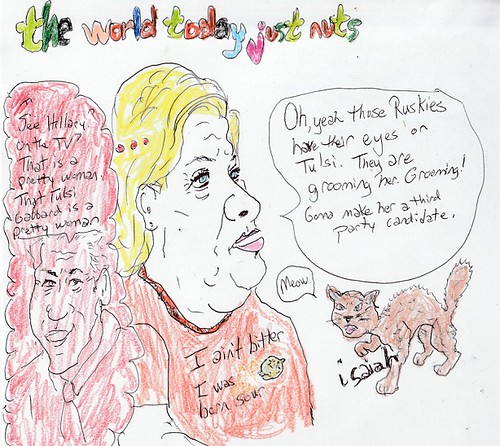 Did you hear the news?

Kate Jackson (star of Scarecrow & Mrs. King, Charlie's Angels, The Rookies and Dark Shadows) went off on Pitch Perfect's Elizabeth Banks this morning.  She cursed her out, ripped some of her hair and bitch slapped her.  Why?  Because Eliabeth Banks has directed (and written) the new Charlie's Angels film out next month and Kate insists it's her show!


Reality: None of that happened.

Why?  Because Kate Jackson has a brain and is a functioning adult.

Have you seen the commercial for the Charlie's Angels movie?

Every time I see it (and it looks good), all I can think of is bitchy Alyssa Milano and Holly Marie Combs having a titty fit over Charmed being rebooted.

They didn't create the show.  They were highly paid to act on it.  When The CW decided to reboot it, they showed up -- out of nowhere because they don't have careers anymore -- whining about how unfair it was and how it was their show and other bulls**t.  Aaron Spelling produced that show.

You know what else he produced?  Charlie's Angels.

Yet Farrah Fawcett, Kate Jackson and Jaclyn Smith didn't have a hissy fit when Drew Barrymore did her movie version, Charlie's Angels.  There was no whining, "We are the show!  They should have asked us!"

Those two bitches need to grow up.

Recently, the two were on TV.  It was a blast from the past -- people like them and the woman who played Mimi on The Drew Carey Show -- people who no longer have careers -- popped up on various ABC shows.  Holly and Alyssa popped up on Grey's Anatomy.  Alyssa's bad plastic surgery has left one side of her face smaller/tighter than the other.  Holly just showed up fat.  That's how you do it, Holly, that's how you get your career going again, finally getting a role and show up fat and unkempt.

They're losers.  I love the Charmed reboot.  Alyssa and Holly weren't owed crap.

They should have been told to shut the f**k up.


In the US, the race for the Democratic Party's presidential nomination continues.  Would Michael Bloomberg enter that race?  The overly confident former mayor of New York City denied his plans to run recently.  Carlos Greer (NEW YORK POST) reports:

Former Mayor Michael R. Bloomberg played it cool when people urged him to run for president at the Hudson River Park annual gala, where he was honored Thursday night.
“He brushed off whispers in the room of a presidential run and gave his signature crooked smile when one table held up signs that read ‘Bloomberg 2020,’ ” a guest told Page Six. Bloomberg sat with fellow honoree Lucy Liu and her “Elementary” co-star Aidan Quinn.

Former New York mayor Michael Bloomberg is at it again – teasing a presidential run. At 77, he won’t even be the oldest in the field, and the billionaire is certainly not short of funding to be able to throw his hat in the ring.
Over the past several weeks, he’s signaled renewed interest in the democratic nomination, telling friends and associates he’s “still looking at” running for president. But he has cautioned he’d only join the race if former vice-president Joe Biden’s faltering centrist campaign takes a decisive hit or pulls out early in primary season, according to a report by CNBC.

Biden’s collapse would likely leave Elizabeth Warren as frontrunner, a liberal candidate with whom he has repeatedly clashed over her anti-corporate policies and fears she will push the party too far to the left and eliminate the chance of a Democratic candidate unseating Donald Trump next year.


I love this, by the way, this press notion that Elizabeth Warren is too left for voters which, as Joe Biden crumbles, is put with the neoliberal claim that Pete, the man who's done nothing but be mayor, is a better candidate.  how so?

Hillary Clinton, in 2016, remember, felt the need to massage anxiety over Bill Clinton being First Spouse by saying he wouldn't be planning state dinners (apparently, had she won, she'd be both the president and the first lady).  It was idiotic and we called it out in real time.  But the 'pragmatic' campaign of Hillary Clinton, insisted that America was wary of a man in the first lady role.

So Hillary had to do that in 2016 -- or felt she had to -- but Pete and his ale spouse are just the ticket four years later?

I'm not saying he couldn't win.  I am saying you are vastly under-estimating American's obvious homophobia (not latent) when you think, if gifted with the nomination, Pete would just sail to victory.

Pete has a chance at the presidency, all the candidates do.  But to repeatedly stress and sell him as the 'safe' choice is to ignore reality.

Again, in 2016, Hillary's campaign -- based on polling -- felt the need to stress that Bill would not be planning dinners.  That was four years ago.

Add male anxiety to homophobia and you've got some rough waters to navigate.  Can they be navigated?  Yes.  But don't pretend it would be easy.

There's nothing about Pete that makes him an easy choice.  He has a huge lack of experience.  Others won't be as timid or stupid as Beto O'Rourke who backed down when Pete tried to challenge him.  Others will point out, "You were a glorified secretary in Afghanistan.  You are not  a combat veteran.  The only medal you have is the medal everyone gets.  Stop pretending you have some vast miliary experience."  And being the major presiding over what?  Racial killings by the police?  Oh, that's a wonderful recommendation.

In what world is a mayor with no real experience at anything (yes, THE NEW REPUBLIC essay was right) the best choice?  The best bet?

Whomever gets the nomination will have to run a  serious campaign and no rushing home at night to sleep in their own bed.  They'll have to work the battleground states.

Does Pete stand a chance of winning?  Of course he does.  But don't look at the landscape and pretend (or lie) that he's the safe choice and that Elizabeth is just too liberal for the voters.  That's not the reality.

Pete is a better choice than Joe Biden because there is enthusiasm for Pete -- that's not a minor point.  Enthusiasm will be crucial to the campaign and to getting the vote out.

Pete's big weakness will probably emerge in the next debate.  He spent the last debate attacking everyone.  The next one may have a few pointing out Pete's own waffles, highlighting his remarks, for example, about Medicare For All at the first debate versus what he's now saying a few months later.

While Beto whimpered like a beat dog, Tulsi Gabbard did not back down from Pete and she actually won her points.  The corporate media worked overtime to pretend that didn't happen but it did.  This would be the same corporate media that whored to get US troops into Syria and now pretends that they are an unbiased bystander on the issue.

On the topic of Tulsi, Isaiah's THE WORLD TODAY JUST NUTS "The Catty  Confessions of Saint Hillary Clinton" went up Sunday.

For reasons that only she knows, Hillary Clinton elected to attack Tulsi last week declaring her a Russian stooge and worse.  Maybe she wants to be remembered historically as the nutty aunt in the attic?  Tulsi responded Saturday via  a fundraising appeal:

Hillary Clinton accused Tulsi Gabbard — a combat veteran, soldier and Major in the Army National Guard — of being “groomed” to be a “Russian asset”. Below, Tulsi fights back and demands Hillary join the race and face her directly.
You can help Tulsi directly take-on the American war machine, and Hillary’s proxies in the DNC and corporate media. Don’t let them silence Tulsi:

DONATE $25
Friend —
Hillary Clinton — the queen of warmongers, embodiment of corruption and personification of the rot that has sickened the Democratic Party for so long — finally came out from behind the curtain yesterday, accusing me of being a Russian asset, asserting I was being “groomed” by Russian interests.
If this a fight she wants to have, one that has implications for all of us and the future of our democracy, then I challenge her to come out from behind her proxies and powerful allies in the corporate media, and face me directly.
From the day I announced my candidacy, there has been a campaign to destroy my reputation. We wondered who was behind it, and now we know.
We must not let Hillary Clinton and her establishment allies silence the voice of the American people and quash all those who dare to offer a dissenting voice in response to our corrupt status quo. Will you help me fight back? Rush donate $25 dollars now and help me get this message in front of as many people as possible before the end of the day.

DONATE $25 »
She’s waging this campaign against our movement because she’s afraid of the threat we pose. Afraid of our growing momentum that threatens to unravel the American war machine and all those who profit from it.
We will not let them win.


Tulsi is a member of Congress.  Another US House Rep considering running for the presidency in 2020 is US House Rep Justin Amaxh.


When I heard Hillary’s remarks, I knew exactly what the right would say: The left smears anyone they don’t like. To my Dem friends: Recognize that this plays right into Trump’s hands; that it diminishes the legitimate inquiry into Russia; that it bolsters Trump’s “hoax” nonsense.
811 replies451 retweets3,045 likes

Hillary does—and did—drive many people into the arms of Donald Trump. Her attack on Tulsi does likewise. In my district, Trump did worse than any Republican in modern times and still beat Clinton by a fair margin. Many Ds in the Midwest rejected her. I didn’t vote for either one.
2,012 replies776 retweets5,419 likes


Amash was elected to Congress as a Republican.  This year, he declared himself an independent.  The reality is probably that he's a Libertarian and would probably seek that party's presidential nomination if he decided to run.

Justin is not pleased with a recent move.

He's referring to the fact that more US troops are headed to Iraq.   Yuliya Talmazan (NBC NEWS) notes, "Defense Secretary Mark Esper said late Saturday that all of the nearly 1,000 U.S. troops pulling out of northern Syria will now head to western Iraq to continue the campaign against Islamic State militants."  Lolita C. Baldor (AP) reports, "Esper’s comments to reporters traveling with him were the first to specifically lay out where American troops will go as they shift from Syria and what the counter-IS fight could look like. Esper said he has spoken to his Iraqi counterpart about the plan to shift about 1,000 troops from Syria into western Iraq."


If Justin runs and hits Donald Trump with that, if anyone running does, that would e a smart point to go after.

It should be obvious to everyone that Doanld's supporters do not care what he did before becoming president.  Or what he was rumored to have done.  They put their trust in him and personal scandals are not going to sway them.  But emphasizing policy points where he betrayed them?  That could be very effective.
on October 21, 2019