Some Tweets from Howie Hawkins

Wednesday, October 2, 2019.  The corruption in the Biden family is a reflection on Joe and in Iraq the security forces attack the protesters.


Starting in the US with the race for the Democratic Party's presidential nomination and starting with the still fading 'front runner' Joe Biden.  War Hawk Joe is the choice of those who would do nothing.  The demands and the needs of people in 2019?  Ignore them, says Joe.  Medicare For All, they don't deserve it.  He's not going to a damn thing.  I would say "except speak a little better than Donald Trump" but Joe can't speak better as we all know.

He certainly can't 'restore ethics' to the White House.  Not with his family.  In recent weeks, a great deal has been rightly made about his niece Caroline Biden.  A few years after she got to walk on assaulting a police officer (if she were African-American, she'd probably been killed in response), Caroline stole over $100,000 by charging -- to a credit card that she had stolen -- purchases at a drug store.  Was the buying drugs?  That's the first question the press should be asking.  As Marcia noted last night, it's doubtful she racked up over $100,000 in charges on toothpaste and tampons.  The second question the press should be asking is what happened to the two men who found Joe's granddaughter's credit card?  When Naomi Biden lost her credit card, two men found it and used it for three purchases.  What sentence did they receive because they charged no where near $100,000.  At least one of those men were African-American.

Most importantly, the press should be asking about the charges.  Caroline was not charged as she should have been.  The press needs to ask why?  Were favors called in?  She was guilty as hell, that's reality.  If a plea deal was made on that case, that needs to be explained.  As it stands, in the state of New York, she should have additional charges the most pertinent being forgery.  There's no way she charged over $100,000 without signing a slip at some point -- a slip with someone else's name since she had stolen the card.  She should have been charged with identity fraud as well.

This was never an issue, for the prosecutors, of can we prove it in court?  The proof was all there, she would have been convicted in court -- and faced a real sentence.  So why did the prosecutors make a deal with her?

People are up in arms over Felicity Huffman and Lori Loughlin, among others, buying their children's way into college.  (As disclosed years ago at THIRD, I know Lori.)  How is Caroline stealing over $100,000 not more appalling?  Don't say, "She's a kid."  No, she wasn't..  She was in her late 20s when that happened, she's over thirty now.

She was allowed to enter a guilty please to two charges.  Why was that allowed?  She'd already assaulted a police officer which, grasp this, is a violent crime.  Who called in favors to get Joe Biden's niece a sweetheart deal that let her admit to fewer charges than she should have been charged with and allowed her to serve no time at all after stealing over $100,000.

Theft and corruption is a pattern with the Biden family.  And, yes, it does reflect on Joe and it should.  Roger Clinton reflected on Bill Clinton, Billy Carter reflected on Jimmy Carter.  In what world do the actions of Caroline Biden, her father James Biden (Joe's brother) and Joe's son Hunter Biden not reflect on Joe?

And let's grasp too that Hunter turns fifty in a few months.  Fifty.  And he's currently got a woman suing him for paternity.  How's Joe going to reassure American families when the reality is that Hunter Biden's not providing for the child that's supposed to be his own?  Even staffers on Joe's campaign have told me it's obvious Hunter's the father of that child.

Family values?  Deadbeat Dad who won't step up to the plate and that's family values?  And Hunter's not a 20-year-old gas pump jockey.  By unethical means, he's earned millions.  And he won't pay child support.

Hunter is unethical and he is the poster boy for "as a Biden" -- remember Joe lying about an incident that didn't happen the way he said it did and swearing that it was true, giving his word "as a Biden."  Hunter's actions (and James and Caroline's actions) say a lot more about what happens "as a Biden."  Patrick Martin (WSWS) notes:

The younger Biden has always been the black sheep of the family, even according to various sympathetic accounts, most of them appearing in publications—The New Yorker, the New York Times, the Washington Post—favorable to the Democrats.
The New Yorker piece, at more than 10,000 words by far the longest, published in July, was obviously planted by the Biden campaign for the purpose of venting all the bad news about Hunter Biden as a preemptive measure against anticipated stink bombs from the Trump campaign.
It was prepared through lengthy interviews by reporter Adam Entous with Hunter Biden. And it delivers a lot of bad news about a career devoted apparently to influence-peddling and drug abuse, both on a scale that matches or exceeds that of any dubious relative of any previous president, at least until Donald Trump.
Hunter Biden was hired by MBNA bank in Delaware, fresh out of Yale Law School, and paid a six-figure salary at the age of 26 because his father was a senator from that state and a fervent defender of the bank and credit card industries. MBNA was then the largest US issuer of credit cards.
He then moved to Washington to take a position in the last years of the Clinton administration. Once the Republicans came to power with the George W. Bush administration, in 2001, he became a lobbyist, helping Jesuit Catholic colleges insert earmarks into congressional appropriations bills.
When earmarks became more difficult to obtain, and after losing money in a speculative venture on the eve of the 2007-2008 financial crash, Biden formed a “consulting” group with Christopher Heinz, stepson of Senator John Kerry and an heir to the Heinz fortune, and a Yale friend of Heinz’s, Devon Archer.
Inevitably, after his father’s election as vice president, given a prominent international role in the Obama-Biden administration, Hunter Biden’s consulting firm branched out into global deal-making, focusing on countries where influence-peddling would be most lucrative and actual business credentials least necessary, among others, China and Ukraine.
In China, the younger Biden traveled on Air Force Two in 2013 with his father, who was making an official trip to Beijing. In the course of this, Hunter Biden introduced a Chinese business partner, Jonathan Li, to the vice president. He left China with promises of future investments, although not with the $1.5 billion that Trump now falsely claims. According to Hunter Biden’s attorney, no money has yet flowed from that particular connection.
Another Chinese business prospect gave Hunter Biden a diamond worth either $80,000 (according to his ex-wife’s divorce suit) or $10,000, according to Biden’s response to the suit, but in any case, much beyond the normal range of business gratuities.
But Ukraine is where Hunter Biden has apparently cashed in most extensively, trading on his father’s name and position. In 2013-2014, a right-wing populist movement backed by the CIA and the German government gained the upper hand in an internal power struggle within the Ukraine capitalist class.
The Maidan “revolution” was actually a right-wing coup, spearheaded by outright fascist forces, some of whom marched under Nazi insignias, against the elected president, Viktor Yanukovych, who was aligned with the Russian government of Vladimir Putin.
Ukraine has been a “wild west” for the operations of foreign intelligence services and capitalist oligarchs at least since the so-called Orange Revolution of 2004, the first successful effort by Washington to bring to power a US-backed regime in one of the major countries emerging from the breakup of the Soviet Union.


Joe Biden trots out his dead family members every chance he gets.  He's been married to Jill, for example, for decades.  But he can't stop trying to get sympathy for losing his first wife.  Apparently, he also trots the dead members out constantly becuase the living ones are so damn corrupt.

I believe it was Elizabeth Edwards, in the fall of 2007, who suggested to the press that if Hillary couldn't even handle her family how was she up to the job of president?  At best, Joe has just looked the other way as unethical deals have been made by his family members who used access to him to rake in millions.  At worst?  Joe may have been an active participant.

He's stated he never spoke to Hunter about the Ukraine deal.  Hunter told THE NEW YORKER that they had one conversation.  But let's again note this Tweet about a photo that was unearthed this week.

BREAKING: After Joe Biden claimed that he never discussed his son’s foreign business dealings with him, A photo surfaced, from 2014, showing the former VP and his son golfing with a board member of the Ukrainian company that paid Hunter Biden $50k a month. This. Is. Corruption.

number of visits to webpage

mentions & followers on social media Funny how the media give him so much less coverage & act like he is a loser. Can’t wait for real life voters.
🇺🇸Americans Abroad For Bernie Sanders  🇦🇺 🌹 added,

#Bernie2020 BernieSanders: RT tylerevansokay: We know BernieSanders will fight for the working class as president — because he always has.

Protests across Iraq have left at least 10 dead and 286 wounded. The injured included 40 security personnel. The fatalities occurred in Baghdad and Nasariya. At least 11 people were arrested in Basra. The Iraqi government blamed “groups of riot inciters” for the violence.
At least 1,000 people gathered in Baghdad’s Tahrir Square, where much of the violence took place; the trigger may have been an attempt to enter the Green Zone. This is largest gathering since Prime Minister Adil Abdul-Mahdi took power last year. Security personnel at some point had turned to live ammunition to disperse the crowds. Demonstrations were also reported in Basra, Dhi Qar, Diwaniya, Karbala, Najaf, Nasariya and Wasit. Use of live ammo to clear protesters was also reported in Nasariya, where a fatality occurred.
Among the complaints are lack of  basic services, rampant corruption, and unequal treatment within the Iraqi Army. Many of the protesters are unemployable college graduates. Riots during the summer of 2018 turned deadly as well. Today, however, the recent removal Iraq’s counterterrorism chief, Lt. Gen. Abdul-Wahab al-Saadi from his post was an added motive to demonstrate; many marchers carried his photo with them.

When it comes to protests, I always have to question Margaret's wording.  The headline, for example, "protest turn violent."  Really?  Now Margaret can rightly question me back (that I'm too sympathetic to protesters) but the protests didn't turn violent, the security response was violent.  For me, her voice is always too passive when Iraqi security attacks the Iraqi people.

Here are some Tweets about the protest. 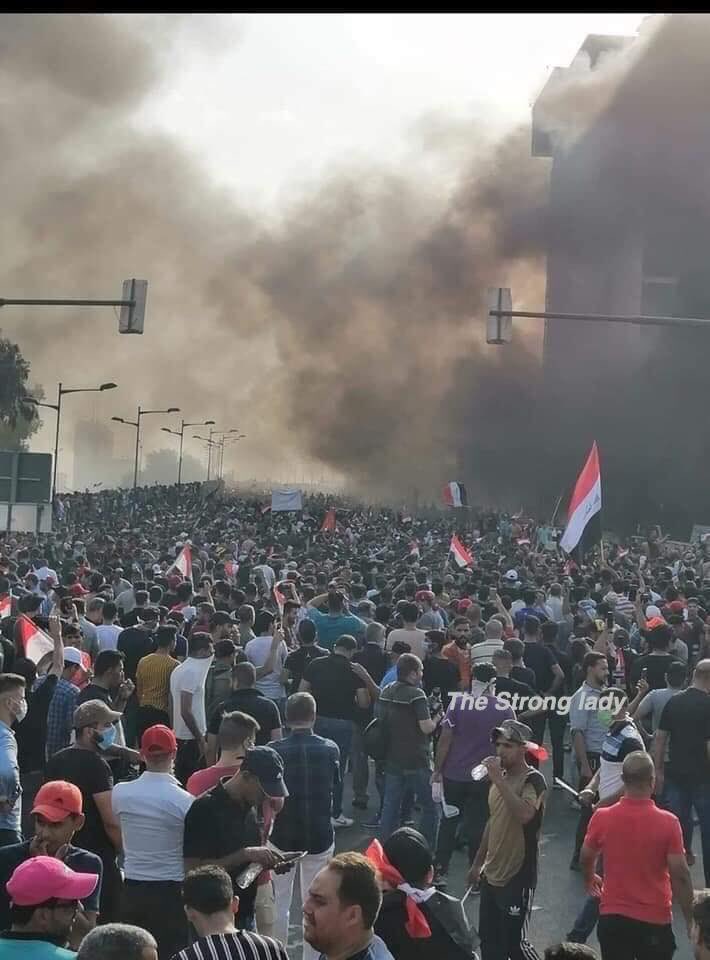 there are people making revolutin now in lraq! Show your support for lraqi people to protest Peacefully!