I am supporting Dario Hunter in the race for the Green Party's presidential nomination.  Here are some Tweets from him.

And here are some Tweets about Dario Hunter.

Tuesday, February 18, 2020.  Bernie Sanders continues to surge in the polls, Joe Biden gets ever more desperate (and is harming him in South Carolina), Michael Bloomberg is the angry oligarch who attacked protesters in 2004, protests continue in Iraq and the media starts to pay attention, and much more.


Starting in the United States where the race for the Democratic Party's presidential nomination continues.  Rebecca Klar (THE HILL) reports:

Sen. Bernie Sanders (I-Vt.) has opened a 12-point lead nationally in the Democratic presidential primary field, according to a new poll.
Sanders has 31 percent support in the NPR/PBS NewsHour/Marist poll released early Tuesday, pushing him into the top spot, which had been held by former Vice President Joe Biden.
Sanders’s support shot up 9 points since last month’s poll, following his victory in the New Hampshire primary.
Biden’s support, however, decreased by 9 points to 15 percent in the new survey. Biden’s downturn pushed him into third place, behind former New York City Mayor Mike Bloomberg, who surged into second place with 19 percent.

What's good for Bernie is sad for Joe.  But, as Marc Caputo (POLITICO) points out, Joe still has the support of some of the elderly.  Apparently, they are people who don't turn out for campaign events but will somehow show up to support him at some point:


The crowds remain small. The message is the same. The schedule is still light.


Joe Biden is campaigning in Nevada in much the same way he did in Iowa and New Hampshire, where he suffered back-to-back losses that transformed him from frontrunner to underdog.
It’s a testament to the campaign’s sense of confidence — or its state of denial — that it continues to operate as if Nevada, the first diverse state to vote this year, will be different for Biden than the two heavily white states where he was crushed.

No, he's not campaigning in the same way he has. 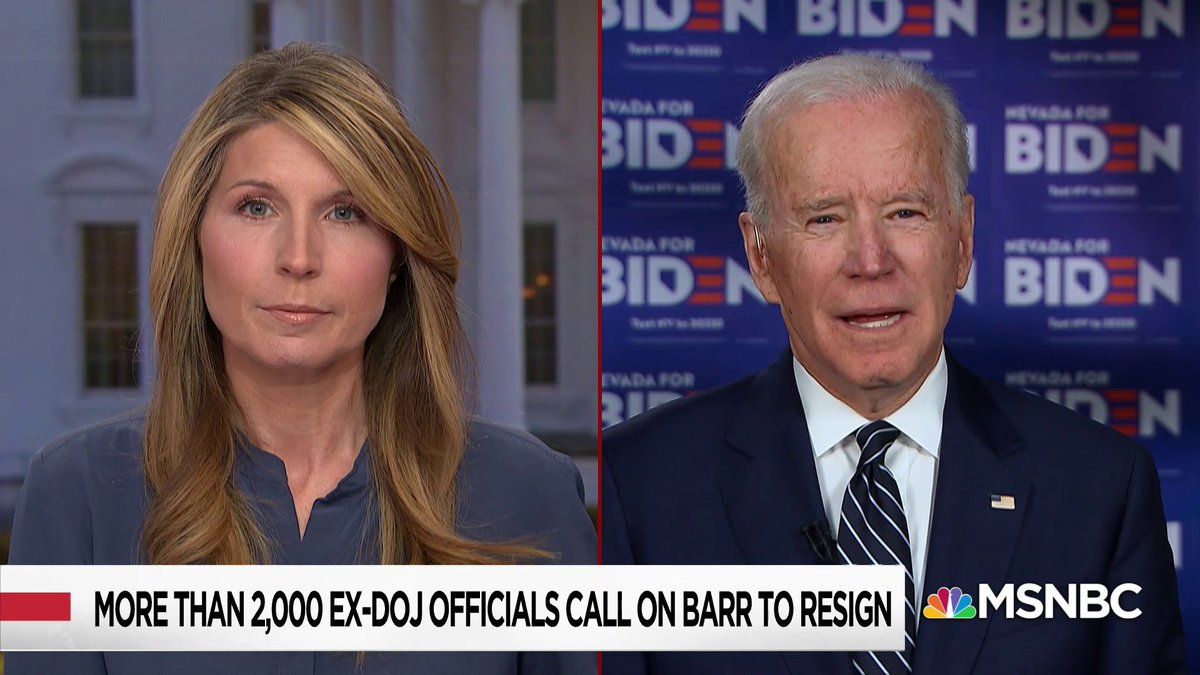 2:41
Deadline White HouseVerified account @DeadlineWH
Former VP Joe Biden on the calls for Attorney General Barr to resign: "This has been the greatest abuse of power I have ever…
90 replies634 retweets3,347 likes


Where is that playing well?

We're in South Carolina and that is costing Joe support.  It's not the Joe who's a leader, it's someone who slings mud.  Two different Joe supporters -- both African-American women over sixty -- raised it yesterday in two different groups we spoke to.  Joe, they insisted, was sounding like every other politician.

He sounds like Nancy Pelosi.  I used to be proud of Speaker Pelosi but all she ever does is scream impeach this person or that person must resign.  I'm tired of her.  And I am getting really tired of Vice President Biden.  He used to campaign on hope and our better nature, now he just slings the mud like any other politician.

Joe's calling card used to read "I'm the adult in the room"; however, it now reads, "Key follower of the 'resistance'."  That's not what he promised South Carolina when they were head over heels for him and now that he's lost every contest so far and now that he's coming off like "any other politician," his support is decreasing in South Carolina.

War Hawks attack one another, as Joe demonstrated days ago when he offered his opinion that Hillary Clinton, in 2016, neglected and ignored African-American voters.  Whose support is that supposed to rally?

People are talking, in South Carolina, about how bitter Joe comes off these days.  And, of course, they're talking about Hunter Biden being a Deadbeat Dad.

There are other issues as well, like Iraq.  Mark Weisbrot (GUARDIAN) points out:

Biden’s selling points as a candidate often lead with his reputation for foreign policy experience and knowledge. But Iraq in 2002 was devastated by economic sanctions, had no weapons of mass destruction, and was known by even the most pro-war experts to have no missiles that could come close to the United States. The idea that this country on the other side of the world posed a security threat to America was more than far-fetched. The idea that the US could simply invade, topple the government, and take over the country without provoking enormous violence was also implausible. It’s not clear how anyone with foreign policy experience and expertise could have believed these ideas.
Senator Dick Durbin, who sat on the Senate intelligence committee at the time, was astounded by the difference between what he was hearing there and what was being fed to the public. “The American people were deceived into this war,” he said.
Regardless of Biden’s intentions – which I make no claim to know or understand – the resolution granting President Bush the authority to start that war, which Biden pushed through the Senate, was a major part of that deception. So, too, was the restricted testimony that Biden allowed. The resolution itself contained deceptive language about a number of pretexts for the war, including al-Qaida and weapons of mass destruction that Iraq did not have.
The Iraq war has generally been seen as one of the worst US foreign policy blunders in decades. It fueled the spread of terrorism and destabilized the Middle East and parts of north Africa. “Isil is a direct outgrowth of al-Qaida in Iraq, that grew out of our invasion,” noted President Obama.
More than 4,500 US soldiers, and nearly as many US military contractors, lost their lives; tens of thousands were wounded, with hundreds of thousands more suffering from post-traumatic stress disorder. Estimates of Iraqi deaths run as high as 1 million.

At the very least, Biden should explain why he played such a major role in winning the authorization from Congress for President Bush to wage this disastrous war.

Another thing that sticks, and I know it was a long time ago and I should probably get over it. But remember right after we had that war in Iraq and it turned into that big ugly mess right away, with all that torture in that prison, Abu Ghraib? And remember that right in the middle, the Republicans had their national convention in New York?

I know the idea was that a lot of delegates would spend a load of money gallivanting about town and it would be good for the local economy. And I know you were the mayor of the host city so it was only courteous to give them a nice welcoming speech. And I know you were a Republican back then, after you stopped being a Democrat and before you became an independent.

But did you really have to stand in front of the whole convention and give a big shout out to President Bush that, “I am here to support him”? Did you really have to have your cops arrest all those demonstrators against the war? And then keep them locked up on some dirty pier for days until the president got out of town?

I know you aren’t the only guy running for president now who got suckered into supporting the Iraq invasion. But do you think you could maybe straighten that one out too?

The Gravel Institute‏Verified account @GravelInstitute 18h18 hours ago
Bloomberg endorsed George W. Bush at the 2004 RNC and was a staunch supporter of the bloody, pointless War in Iraq. 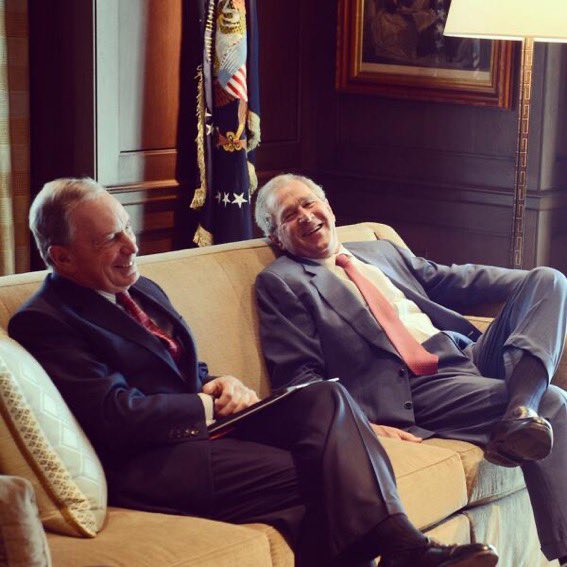 And that's who some Democrats want to support?

Oliver Willis‏Verified account @owillis 2h2 hours ago
If nobody brings up Bloomberg going all in for Bush while our soldiers were being ripped to shreds in Iraq for wmd lies...
/>
3 replies7 retweets38 likes

The Democrats who fight for a better America rally around candidates like Bernie Sanders because they don't put up with nonsense.

Zephyr Teachout‏Verified account @ZephyrTeachout 40m40 minutes ago
Zephyr Teachout Retweeted NPR
Wow!!!! IMHO Bernie is surging on the strength of his optimism, the strength of his character (people really trust him), his seriousness. He doesn't tolerate bullshit, bigotry, cynicism, or suffering. This campaign is built on compassion and justice.
Zephyr Teachout added,
NPRVerified account @NPR
Sen. Bernie Sanders has 31% support nationally, up 9 points since December, the last time the poll asked about Democratic voters' preferences. His second-place rival is Michael Bloomberg, who will be on the debate stage for the first time Wednesday. trib.al/f9F6w0S
18 replies135 retweets638 likes

During a rally Monday night in Tacoma, Washington attended by more than 17,000 people, Sen. Bernie Sanders took aim at billionaire businessman Michael Bloomberg's efforts to buy his way into presidential contention, condemned the former New York City mayor's record of supporting racist policies, and highlighted the former Republican's history of opposing basic progressive economic initiatives like raising the federal minimum wage.
"Today, we say to Mayor Bloomberg, we are a democracy, not an oligarchy," Sanders said to cheers from the crowd. "You are not going to buy this election."


Michael Bloomberg isn't just Donald Trump's buddy, he's also deeply repugnant all on his own.  "Kill it!" That's what he told a pregnant staffer.  "Kill it."  That doesn't play well in South Carolina to the groups we speak with and won't play well in most areas.  It's not funny.  It's not a joke.  It's a disgusting thing to say all by itself before you even factor in that Bloomberg was the boss of this woman.  Shame on him.  Shame on anyone who lets him buy the election.  He's a disgusting person.

Stephany Rose Spaulding‏Verified account @StephanyForCO 3h3 hours ago
So we are just supposed to replace one naked emperor with another? This is not normal and we have better options! #OligarchyDestroysEveryone
1 reply42 retweets193 likes


In Iraq, the attacks on the protesters continue.

ICRC Iraq‏Verified account @ICRC_IQ 20h20 hours ago
Today we supported Sheikh Zayed Hospital in #Baghdad with surgical equipment and medicine to help treat the wounded in ongoing protests. So far, we have assisted 13 hospitals across Baghdad and the southern #Iraq provinces over the past months. 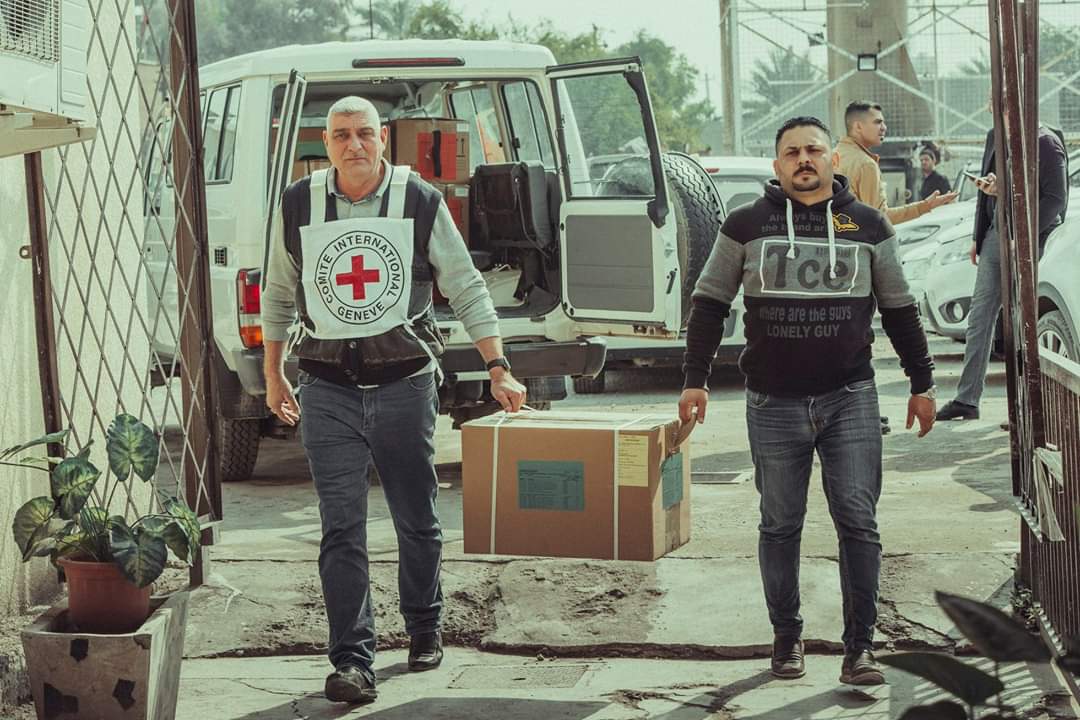 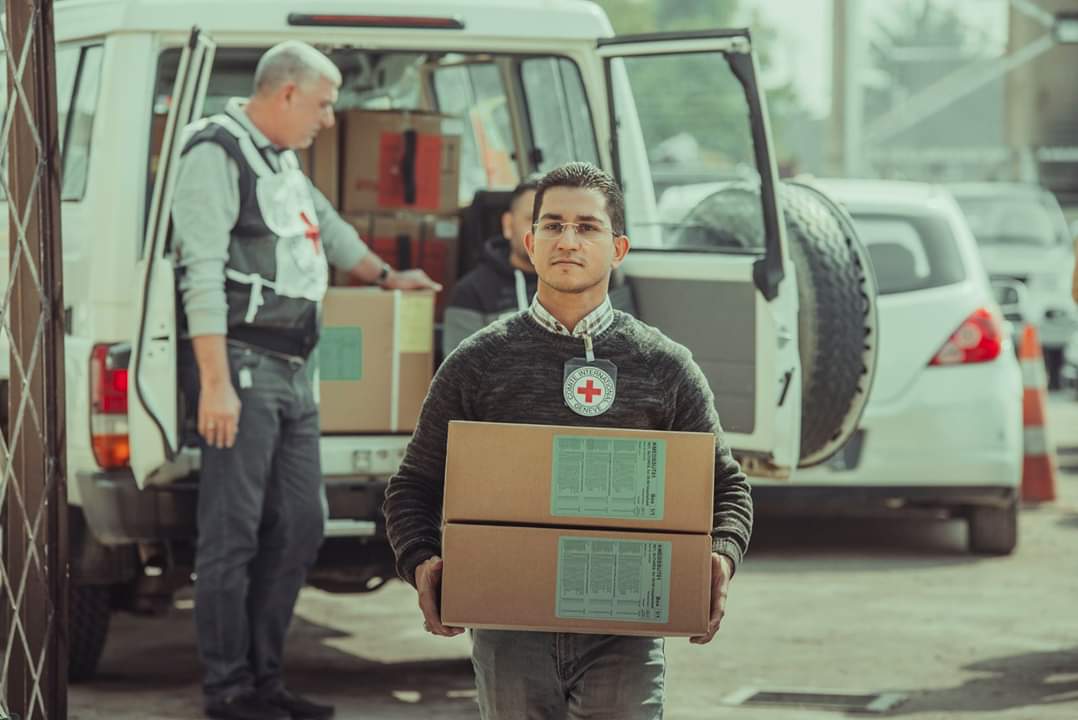 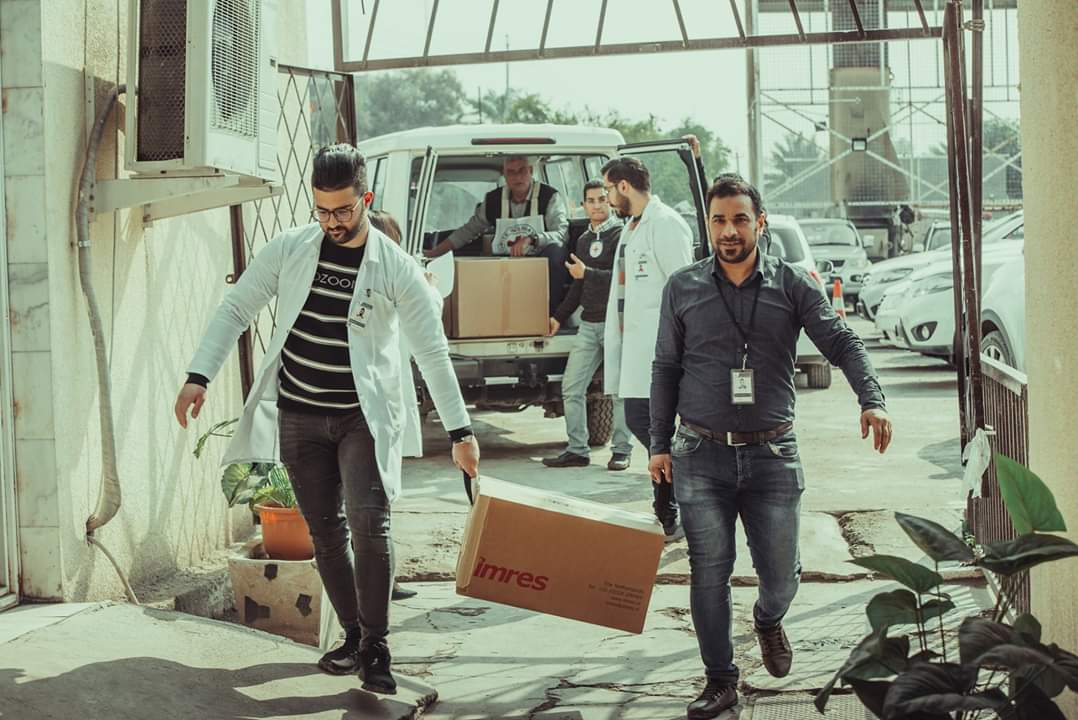 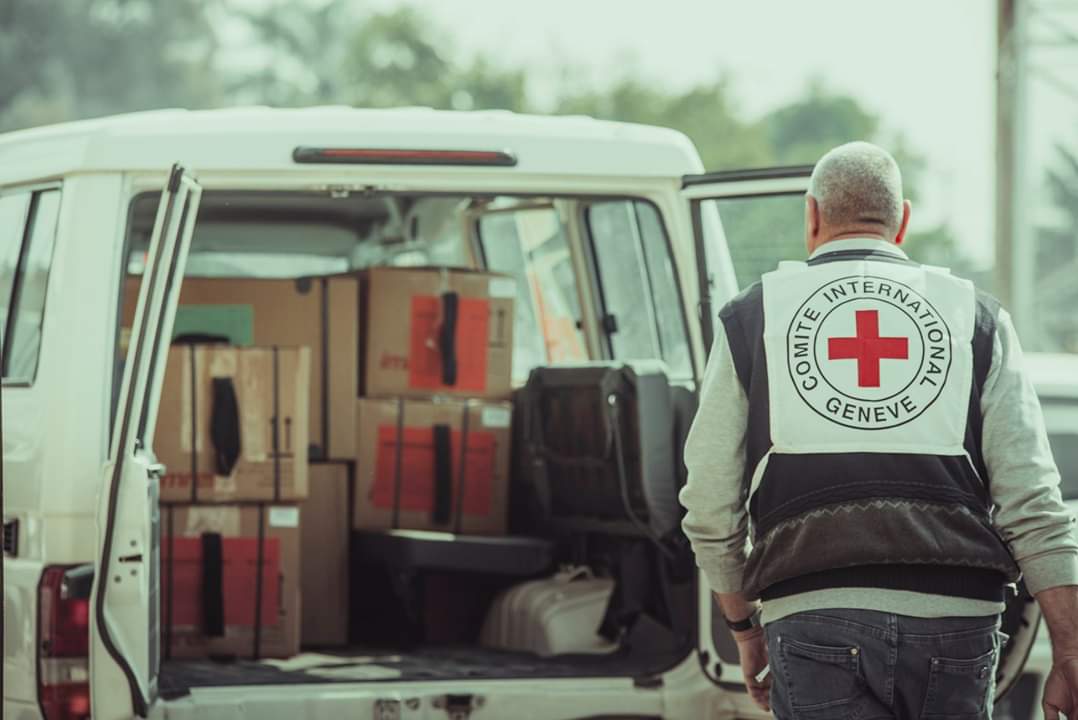 
The Iraqi government’s response to the popular protest movement has been violent and brutal. In four months, security forces killed 669 civilians and injured more than 25,000, according to Iraq’s human rights commission, local NGOs and activists. Some 2,800 are reported to have been detained.
Some of these security forces are, the Guardian has been told, following a parallel crackdown to end the protests and silence activists and journalists through kidnappings, intimidations and assassinations. Last month a television reporter and his cameraman were killed in their cars hours after the reporter denounced the clampdown in a Facebook video. Hayder’s kidnapping, it would seem, was part of the same effort.
“From day one, the government chose to pursue violent options in dealing with the protesters,” a senior official at Iraq’s human rights commission told the Guardian, speaking on condition of anonymity.
“The violence came in waves,” he said. “First, there were mass killings; 157 were killed in the first three days alone. By early November we started getting reports of kidnappings, not only in Baghdad but also in Ammarah and Nassiriya. Activists, journalists, academics and anyone suspected of supporting the protest movement logistically or morally started receiving death threats before they were kidnapped.” Two activists in Karbala, the commissioner said, were assassinated a few days after meeting with him and his colleagues.
In Tahrir Square, pictures of the disappeared are posted on walls, electricity poles or flapping tent doors. Some are old, yellow and tattered, others are fresh and new.