Jussie was back in court

"Jussie's got a defense!" just went up at THIRD.  Jussie was back in court today.


Is there really any point to his continuing to lie?

No one believes him.

And his new lie is that the brothers beat him up.  They say he paid them to make it look like he was attacked.  He now says they attacked him.

The two brothers.  From Nigeria.  With the accents.  They told him "This is MAGA country" and they really sounded like White men to him.

Is no one around to tell him: Come clean, already?

Apparently not.  He's a liar surrounded by liars and enablers.
This is C.I.'s "Iraq snapshot:"

Monday, February 24, 2020.  Bernie Sanders wins Nevada, Joe Biden is desperate for a win in South Carolina -- actually, for a win anywhere, the Iraqi Parliament moves to vote on the prime minister designate's Cabinet, and much more.

In an appearance on MSNBC Sunday morning just hours after Sen. Bernie Sanders' decisive victory in the Nevada Democratic presidential caucus, author and political commentator Anand Giridharadas said the senator's win could represent the dawn of "a new era in American life" and called out establishment forces—including MSNBC—for reacting like "out-of-touch aristocrats in a dying aristocracy."
"Last night was a historic win that I think a lot of us are still struggling to understand," said Giridharadas. "Something is happening in America right now that actually does not fit our mental models. It certainly doesn't fit the mental models of a lot of people on TV."


Bernie took 47% of the votes in Nevada.  The distant second was Joe Biden who took 21% of the votes.  It's not going well for Joe.  Igor Bobic (HUFFINGTON POST) observes:


It’s come to this: Former Vice President Joe Biden badly needs a primary victory to keep alive his chances of winning the Democratic nomination, and his firewall state of South Carolina is finally heading to the polls later this week.
But in a place where he once looked unassailable (with support as high as 46% at one point), Biden is suddenly facing a competitive fight as other candidates in the race continue to make inroads with Black voters, his core constituency.
A disappointing finish here would be devastating to his campaign and his path forward, especially after repeated assurances from his staff that he was positioned to do best in more diverse communities like those in the Palmetto State.


“It’s not looking great. He has the opposite of momentum,” South Carolina Democratic strategist Tyler Jones told HuffPost. “He’s gotta win South Carolina convincingly to stay in the race. Expectations are also very high for him, which they set for themselves. It’s win or go home for him.”


At THE ATLANTIC, Ibram X. Kendi takes on the myth that moderates win.  Lies are all that prop up Joe Biden's campaign.  Becket Adams (WASHINGTON EXAMINER) notes one lie that should be front and center at the next debate:

Former Vice President Joe Biden’s penchant for misstating the facts is so severe his opponents often question his mental acuity.
But they may want to consider the possibility that he is merely dishonest.
Biden told an audience at a recent campaign event in South Carolina that he was arrested decades ago in South Africa for attempting to meet with then-imprisoned Nelson Mandela.
“This day, 30 years ago, Nelson Mandela walked out of prison and entered into discussions about apartheid,” the former vice president said. “I had the great honor of meeting him. I had the great honor of being arrested with our U.N. ambassador on the streets of Soweto, trying to get to see him on Robbens Island.”
Biden has told this story at least three times this month, including a version that pegs the year of his alleged arrest at around the time he proposed to his wife in 1977.
There is only one problem with the former vice president’s story: No one seems to have any idea what he is talking about, least of all the aforementioned U.N. ambassador, Andrew Young, who told the New York Times, “I was never arrested and I don’t think he was, either.”
The Times scoured for evidence of the supposed Soweto incident. It came up empty-handed, which is astonishing considering Biden was elected to the U.S. Senate in 1973, four years prior to his alleged arrest in South Africa. It should not be difficult to find evidence of a member of the U.S. Congress being forcibly detained in a foreign country during an overseas trip in the late 1970s. Also, there is the fact that Soweto is roughly 900 miles away from Robbens Island.

The Biden campaign declined to respond to five separate requests for comment from the Times, which obviously does not bode well for the credibility of the anecdote.


It never happened.  Never.  He's a liar.  He's a liar who will say anything.  He is not to be trusted.  He is a War Hawk and, as he flounders, the other War Hawks rush forward to protect him.  Tyler MacDonald (INQUISITR) reports:


After Bernie Sanders‘ victory in Nevada, conservative commentator Bill Kristol called on former President Barack Obama to hit the campaign trail in South Carolina for his former Vice President, Joe Biden, and help him take down the Vermont Senator.


Bill Kristol is a raging idiot who should be barred from public discourse due to the blood on his hands.  We should also grasp that any candidate who can't win a state without Barack stepping in to campaign for them isn't someone we need on the ticket.

In other news, Joe Biden has claimed that Russian bots are attacking him on Facebook.  Then it was pointed out to Joe that he was holding an Etch-a-Sketch.

Now running as the presumptive frontrunner in the Democratic presidential primary, Sen. Bernie Sanders on Monday morning unveiled a sweeping new proposal that would guarantee high-quality child care and then pre-kindergarten education to every child—regardless of income or status—in the United States.

Citing figures that show the average American family with young children spends $10,000 per year on childcare—a burden that eats as much as 35 percent out of the annual budget of low-income families' annual budget—the detailed early childhood plan released by the Sanders campaign seeks to address the crisis and economic hardship by providing free child care starting at infancy and pre-K beginning at age three.
"Childcare must be guaranteed for every child regardless of their parents' income, just like K-12 education," said Sanders in a statement. "We know that the first four years of a child's life are the most important years of human development, so it is unconscionable that in the wealthiest country in the world, we do not properly invest in early childhood education." Sanders said.
Sanders—who has achieved frontrunner status in the Democratic 2020 race on a platform of universal programs like Medicare for All and denouncing "grotesque" levels of inequality—releases his early childhood plan just two days after a landslide win in the Nevada caucus and with Super Tuesday just over a week away on March 3.

In a study released last month, the Economic Policy Institute (EPI) found that American families spend approximately $42 billion annually on child care for their children. That figure does not include the $34 billion spent by federal and state governments on child care support systems, services, and subsidies. According to EPI, parents of young children forgo $30 to 35 billion each year in income due to the high cost of early childhood care and education, a figure that translates into an estimated $4.2 billion in lost federal tax revenue.


Corporate media is excited that, on Wednesday, Jim Clyburn will endorse Joe Biden.  At a certain point, it just doesn't matter.  Barbara Boxer was popular in my state while she was in the Senate but with each re-election, she meant less and less to new voters.  Clyburn's endorsement would help Joe sew up the elderly -- but I thought he already had a grip on them?   Clyburn is the establishment and has been that for years.  His endorsement will not drive any young voters to Joe.

Brad VanPelt‏ @BradVanpelt 37s38 seconds ago
Replying to @JoeBiden
Really Quid Pro Gropin’ Joe? Where’s yours and your sons true tax returns at you goon!? Don’t lecture us when you lie and cheat to save on yours there big guy!! 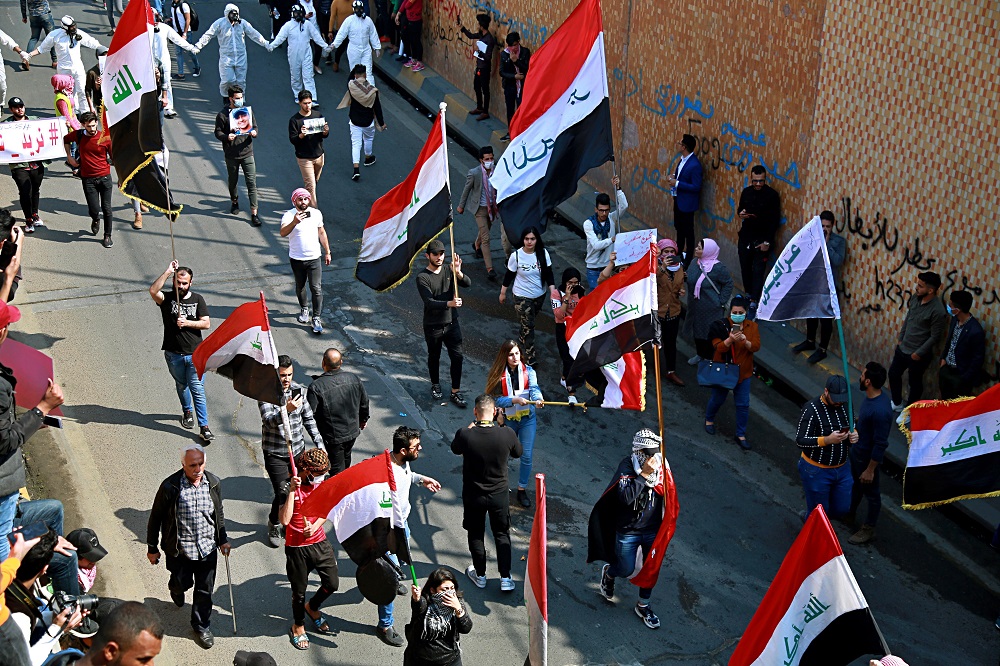 
Replying to @euronews
Anti-government protests continued in Iraq on Sunday, with over 1,000 students marching through the centre of Baghdad. "Our soul and blood, be sacrificed to you Iraq" was chanted one day after at least two protesters were injured in confrontations with riot police
0 replies0 retweets1 like


1. the independent research group, the only representative of the GAF International Research Foundation conducted a survey of Iraqi public opinion on the events that took place in October 2019 and are still ongoing. The research conducted with Iraqis representing all the provinces of Iraq and in various social, demographic, economic, educational and sexual sectors was based on more than 2000 interviews conducted face-to-face and computerized by the group of researchers and according to the latest technology used in this field. The survey was conducted during February 2020. Where the random sample method (PPS) was used.
2. Top Results:
1. There is absolute support for more than 85 % for demonstrations and in various regions, including more than 80% of support among the kurds while the ratio has reached much more in the rest of the regions. While various southern and Baghdad provinces have shown a very close level of support for demonstrations, the provinces of diyala, kirkuk and Mosul have shown the highest levels of support compared to the other provinces that were occupied (or parts) by ISIS gangs.
2. The percentage of Iraqis who support the demands of the protests and are legitimate over 90 % WHILE ONLY 5 % of those who say it is illegal, and the percentage of those who say it is an external conspiracy on Iraq only 10 %.
3. The two highest demands in support of the two leaders are to hold those responsible for killing and killing protesters and then early elections.
4. About 50 % of Shia and more than 15 % of the year reported that they personally participated in these demonstrations in different ways and at least once. The citizens of Mosul and Tikrit showed the highest desire to participate in the demonstrations if they broke out in their wallets compared to the other provinces where the demonstrations did not break out.
5. Although there are some relative differences, Iraqis have not encouraged any of the major political leaders to discontent their political performance. None of the political leaders (other than the Kurds) were able to reach 20 % of confidence in their performance.


Iraqi lawmakers on Monday scheduled a confidence vote for the government of prime minister-designate Mohammad Allawi later this week, as the US called for the premier to protect its troops.

Allawi, who was named as a consensus candidate by Iraq’s divided political parties on February 1, had called for a Monday vote, following months of protests demanding a complete government overhaul.

His request was backed by his predecessor Adel Abdul Mahdi, deputy parliament speaker Hassan Karim Al Kaabi, and Shiite cleric Moqtada Sadr who threatened to organise mass rallies outside parliament unless lawmakers back Allawi’s government in a confidence vote this week.

Lawmakers decided to schedule the vote for Thursday, according to a statement from parliament.