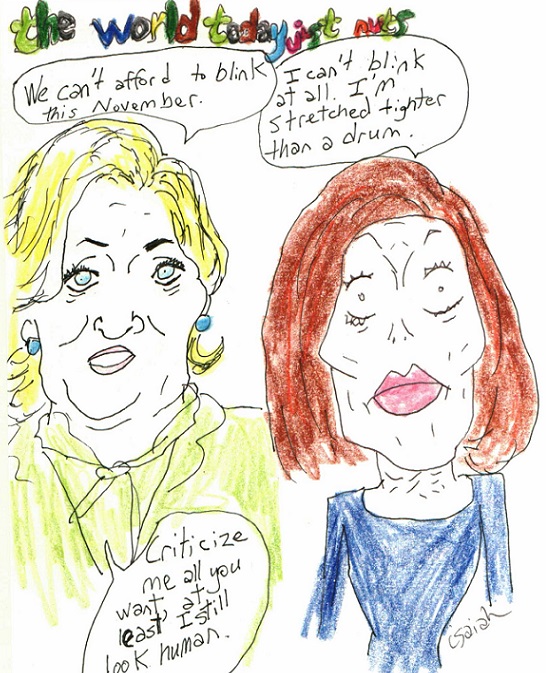 Now let's talk about Tara Reade.  Did you read this garbage:

Asked by reporters Tuesday, Gillibrand said she doesn’t see a contradiction between how Democratic lawmakers are handling Reade’s allegations and how they handled allegations levied against Supreme Court Justice Brett Kavanaugh by Christine Blasey Ford in 2018, which Kavanaugh denied during congressional testimony.
“No, and I stand by Vice President Biden. He has devoted his life to supporting women and he has vehemently denied this allegation,” the New York Democrat said.

Kirsten Gillibrand is no friend to women.  Not anymore.  She's a scared little bitch who regrets calling out Al Franken because men were mean to her after.

As a rape survivor, I have no respect for a little titty baby who can't stand on her own two feet.

Tara's telling the truth.  Joe Biden is a rapist.  Kirsten is covering up for a rapist.  Bitch better not expect me to defend her.  You can be sure she's going to have a primary challenge.  There are too many people who hate her.  If they try to replace her, bitch is on her own.

She's a liar, a coward and a hypocrite.

Wednesday, April 29, 2020.  Joe Biden's been issuing talking points and that's apparently all Stacey can repeat publicly, shameful women in Congress refuse to speak out, and much more.


Tara Reade has accused Joe Biden of assault.  The dimmest of the dim is Nancy LeTourneau.  Where does she work?  THE DNC organ WASHINGTON MONTHLY.  She's not just a whore, she's really, dumb whore.  Apparently ignoring the evidence that has emerged over the last seven or so days was Nancy's guiding principle.  Whores like Nancy don't seem to grasp that they may fool some in the present but that women will not forget this and that she's destroyed her own career because this moment will be her defining moment when people look back.  "What Is Disturbing ABout Nancy LeTourneau's Allegations" -- to steal the title to her own bad article (no link to gutter trash) is that she's hoping you're stupid.

"After choosing to remain anonymous to other reporters, two of Reade’s friends confirmed to Rich McHugh that she had told them about the assault at the time."  Who writes that stupidity but a whore named Nancy?  They didn't choose to remain anonymous.  They were never asked by the press.  That's why they came forward.  Nancy's not just a whore, she's a lying whore.  Women will not forget.  Sure, some delusional bitches will applaud her right now (maybe her media crush Joan Walsh), but this is career suicide.  She better start penning some opus about how women are destroying the world because this article means her only future is as anti-woman writer who plugs her books on FOX NEWS.

Biden and his side are operating under the assumption that if they don't give Reade's allegations any more than the statement offered by deputy campaign manager Kate Bedingfield -- in which she denies Reade's claims -- then this will all go away shortly. There's plenty of reason to believe that is not, in fact, the case.

Talk about whoring.  You don't get to be a bigger whore than Chris without a lamp promising you seven wishes.  Joe refuses to speak publicly.  That doesn't mean he "and his side" are not doing anything.

Nancy LeTourneau's awful article reads like it was written by his campaign.  It was certainly shaped by them as so much of the coverage has been.  Ruby Cramer and Rosie Gray (BUZZFEED) report:

While Joe Biden has remained publicly silent about a sexual assault allegation made against him, his presidential campaign has sought to coordinate and unify Democratic messaging on the matter, advising surrogates earlier this month to say that the allegation “did not happen.”
The Biden campaign circulated talking points among top Democratic supporters shortly after the New York Times published a story earlier this month about the allegation by Tara Reade, a former staff assistant in Biden’s Senate office who says he assaulted her in 1993.
With good news and bad, talking points are standard fare on presidential campaigns. In substance, the private guidance largely hews to the sole public statement on the matter from Biden’s deputy campaign manager, Kate Bedingfield.
But the messaging shows that while Biden has stayed quiet on the allegations on the eve of his nomination, aides were taking the claims seriously enough behind the scenes to coordinate messaging among other Democrats to try to cast the matter as one that’s been thoroughly vetted and determined to be unfounded.

It's time to stop that.  If you want to end rape culture, you end it.  That means no one who's accused gets to hide behind skirts and coordinate the coverage.

Every Thursday, we highlight women in Congress.  We didn't last Thursday.  I finally got around to doing it over the weekend.  I'm not sure if we'll bother this week.

Tara Reade is credible.  Not credible?  The various senators and reps who refuse to speak up.  That's Senator Patty Murray certainly.  That's also Senator Kirsten Gillibrand.  With Kirsten, I do get it.  She spoke out for survivors and took a lot of crap for it.  First from a female senator no longer in the Senate but on CNN constantly.  Then she got attacked for speaking out against Al Franken's outrageous behavior.  In fact, that harmed her a great deal when she was running for the Democratic Party's presidential nomination.  If Kirsten had run a stronger campaign, it wouldn't have.  Her enemies among the party were demonizing her.  She wasn't defending herself and she wasn't projecting strength.  Her weakest point was her speaking voice.  She sounded too young, too immature and if we're talking about what hurt her campaign, we need to start there.  But I get her being shy to step up to the plate again.  I do.  But that's no excuse if you believe in the cause.  I love Patty but there's no excuse for her to be silent.  Or for Hirono or any of them.  They weren't silent with regards to someone they were afraid would sit on the bench so why be silent about someone who might end up president?

As Democrats, in fact, it's their duty to stop this nominee so that a stronger nominee can represent the party.


It's shameful that so many women in Congress refuse to speak out.

It's shameful that Hillary endorsed Joe as all this is going on.  But it's Hillary's pattern.  She put up with Bill's lying and cheating and she let herself be publicly humiliated more than once.  She saves her real rage -- to this day -- for Barbra Streisand and continues to believe that Bill slept with her. Why that woman, Barbra, is the breaking point, I have no idea.  But she also backed Brett McGurk -- a Bully Boy Bush loyalist who couldn't keep it in his pants.  Then there's Philippe Reines who, as the late journalist Michael Hastings noted, had a history of harassment.  There's Hillary's close ties to Harvey Weinstein and the way she tried to bully Ronan Farrow into not pursuing the Weinstein story.  In fact, most of the men around Hillary have one scandal after another of their abuse of women.  She's attracted to them and they to her.  So it's not real surprise that Hillary would endorse Joe.

But the silence from these other women is shocking.

"I believe that women deserve to be heard and I believe they need to be listened to, but I also believe that those allegations have to be investigated by credible sources," Abrams, who is said to be on the shortlist to be Biden's running mate, told CNN's Don Lemon.
"The New York Times did a deep investigation and they found that the accusation was not credible," she added. "I believe Joe Biden."

Is Stacey a lesbian?  46 and never married?  There's nothing wrong with being a lesbian but, as Olivia Pope told the unmarried politician on SCANDAL, people can relate to gay, they can't relate to celibate.  And if she's a closeted lesbian, that is an issue.  We don't need closet cases a heartbeat away from the presidency.  We also don't need some loser who can't even win a statewide office as vice president.  I think even Amy Klobuchar would agree with that.  Certainly, Kamala Harris would as well.  Both women have won statewide races.

Stacey's a state legislator.  That's all she's ever been.  She doesn't have the experience to sit in a Cabinet, let alone be a vice president -- especially to a man in poor health.

Stacey on the ticket means Joe's campaign spends weeks and weeks defending her.  They don't have the time, they don't have the energy.  But Joe is stupid enough to ignore that warning -- same way he's ignored every other.


A former neighbor of Tara Reade, a woman who has accused Joe Biden of sexual assault, has come forward to say that Reade told her about the alleged assault in the mid-1990s. The account, purportedly told to the neighbor within a few years of the alleged incident, marks the first detailed and on-the-record corroboration of Reade's allegation against the presumptive Democratic nominee for president.
Lynda LaCasse told CNN in a phone interview Monday that she remembers stepping out of her two-bedroom home in Morro Bay, California, to sneak in a cigarette break away from her children. It was 1995, perhaps even early 1996, based on her recollection. LaCasse said she often sat outside on her stoop smoking Virginia Slims, and that on this particular day, she cried as she discussed with Reade a custody battle for her kids.
Reade began to cry too, LaCasse said.
"She started talking about Joe Biden. And I didn't really know much about Joe Biden," she said. LaCasse said that Reade told her that when she was working in Washington some years prior, Biden "had pushed her up against a wall and he put his hand up her skirt and he put his fingers inside of her, and she was dealing with the aftermath of that."

In Iraq, the protests against the Iraqi government continue.  MEMO reports:

Iraqi protesters gathered in Tahrir Square in the capital Baghdad after the government scaled back some of its anti-coronavirus measures during the month of Ramadan, Anadolu Agency reported
The protesters held photos of Prime Minister-designate Mustafa Kadhimi with a red “X” on his face in rejection of his candidacy for the role.
Activist Ghassan Adel told the news agency that “any transitional government that brings with it party quotas is rejected not only in Tahrir Square, but in all the country’s protest arenas”.
Adel, who had been protesting in Tahrir Square for months, said: “The masses are stronger than tyrants, parties and politicians,” adding that “this government will not pass. If it is passed, we will overthrow it with escalatory measures.”