Healthcare was a top 2020 issue before the COVID pandemic hit, yet we are the only campaign with ballot access calling for #MedicareForAll! We need real solutions to the life & death problems that we face, not more of the same corporatism. Get involved at https://howiehawkins.us 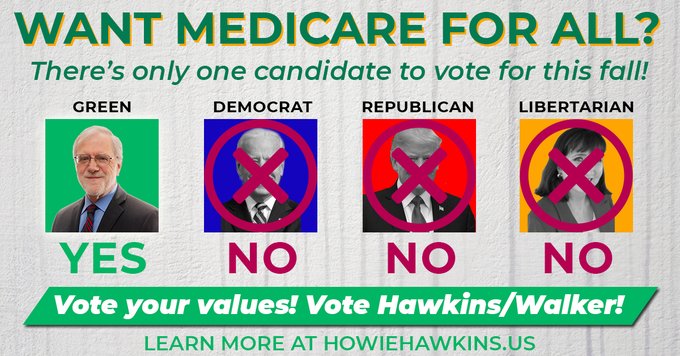 That's Howie Hawkins and that's among the reasons that I am voting for him for president.

Hawkins, who participated in the march for Climate Justice Through Racial Justice in Manhattan on Sunday, outlined 7 key initiatives: Green New Deal, Economic Bill of Rights, Medicare for All, Homes for all, Democratic Community Control of the Police, Reparations for African-American rights, and Honor Indigenous Treaty Rights.

“People of color and low-income communities are the principal victims of climate change. We face this existential threat to our future since the leaders of both major parties, in exchange for campaign contributions, allow fossil fuel companies and others to pollute and exploit such communities. We can not solve climate change without system change, including ending racial injustice,” said Hawkins, the first US candidate to campaign for a Green New Deal in his 2010 race for Governor of New York.

Hawkins noted that the march included the key demands of zero emissions by 2030 and a halt to new fossil fuel infrastructure, positions opposed by Trump and Democrats, including Biden. Trump and Biden also oppose an immediate ban on fracking, a position Hawkins first campaigned for in 2010.

“We need a socialist economic democracy that empowers the racially oppressed and the economically exploited to receive the full value of their labor and provide for their own communities,” said Hawkins, a retired Teamster from Syracuse. “We need a democratic and ecological socialism, so we have the power to meet the basic needs of all within ecological limits.”

Hawkins, while supporting the Defund the Police demand to reallocate a significant portion of police budgets to needed social services, stated that “we need to go further. Reforms that do not include who controls the police, who they work for, who has the power over policing will not stop the police killings of unarmed Black people or the racism that pervades all our institutions. We need community control of the police to transform policing so that it serves and protects those who are now oppressed instead of the property and privileges of the powerful elites. We need the ability to clean house and rid police departments of racist and sadistic officers.”

Hawkins’ ecosocialist Green New Deal (GND) plan includes a multi-trillion investment in jobs, businesses, housing, schools, health care, and public transit in racially-oppressed communities that have been segregated, discriminated, and exploited for generations. A significant portion of GND funding will bypass governors and mayors who have misused and abused these communities and fund community- and cooperatively-owned businesses, GND factories, and housing and community-controlled schools, health care, public transit, and police.

Hawkins said today’s youth-led anti-racist and divestment demands in the climate justice movement were similar to the youth-led anti-apartheid movement’s divestment demands a generation ago. It was at Hawkins’ initiative that Dartmouth College students built a shantytown on the college green in the fall of 1985 demanding divestment of college funds from companies doing business in apartheid South Africa. That action sparked shantytown protests on campuses across the nation and a swelling of anti-apartheid actions across society over the next year until the US government imposed sanctions on South Africa in the fall of 1986. The apartheid regime responded by freeing Nelson Mandela and negotiating a transition to democracy. 1243 institutions have divested $14.38 trillion from fossil fuel companies to date.

“The anti-apartheid divestment movement aroused a new generation of activists. Zephyr Teachout has said that visiting the Dartmouth shantytown when she was in high school near the college was an inspiration for her activism. We see the same happening today with youth in the climate justice movement today. It is time for New York State to listen to these young people who are fighting for their future and divest,” Hawkins said.

Howie stands for the issues that matter to me.  I won't be wasting my vote, I'll be voting for someone trying to bring about a better future.

Tuesday, September 22, 2020.  Another passing, professor Stephen F. Cohen, elections remain a mess in the US and in Iraq, and more.

Starting the US where Stephen F. Cohen passed away September 18th.  The professor was married to THE NATION's Katrina vanden Heuvel.  Katrina writes:

Through all our years together, Steve was my backbone, fortifying me for the battles Nation editors must wage (often with their own writers, sometimes including Steve!), and giving me the personal and political courage to do the right thing. But never more so than when we entered what might be called the “Russiagate era.”

While Steve liked to say it’s healthy to rethink, to have more questions than answers, there was a wise consistency to his political analysis. For example, as is clear from his many articles in The Nation in these last decades, he unwaveringly opposed American Cold War thinking both during the Cold War and since the end of the Soviet Union. He was consistent in his refusal to sermonize, lecture, or moralize about what Russia should do. He preferred to listen rather than preach, to analyze rather than demonize.

This stance was no recipe for popularity, which Steve professed to care little about. He was courageous and fearless in continuing to question the increasingly rigid orthodoxies about the Soviet Union and Russia. But in the last months, such criticism did take its toll on him. Along with others who sought to avert a new and more dangerous Cold War, Steve despaired that the public debate so desperately needed had become increasingly impossible in mainstream politics or media. Until his death he’d been working on a short article about what he saw as the “criminalization of détente.” The organization he established, the American Committee on East-West Accord, tried mightily to argue for a more sane US policy toward Russia.

He fared better than I often did confronting the controversies surrounding him since 2014, in reaction to his views on Ukraine, Putin, election interference, and more. Positions he took often elicited slurs and scurrilous attacks. How many times could he be labeled “Putin’s puppet”? “Putin’s No.1 American apologist”? Endlessly, it seemed. But Steve chose not to respond directly to the attacks, believing -- as he told me many times when I urged him to respond -- that they offered no truly substantive criticism of his arguments, but were merely ad hominem attacks. What he did write about -- he was increasingly concerned about the fate of a younger generation of scholars -- was the danger of smearing those who thought differently about US policy toward Russia, thereby silencing skeptics and contributing to the absence of a needed debate in our politics, media, and academy.

Cohen called out the attempts to rebuild The Cold War and saw this taking place while Barack Obama was still president.  We spoke of this after Ed Snowden was in Russia trapped at the airport.  He was a strong voice and a great thinker.  At CONSORTIUM NEWS, Gilbert Doctorow notes:

A year ago, I reviewed his latest book, War With Russia? which drew upon the material of those programs and took this scholar turned journalist into a new and highly accessible genre of oral readings in print.  The narrative style may have been more relaxed, with simplified syntax, but the reasoning remained razor sharp. I urge those who are today paying tribute to Steve, to buy and read the book, which is his best legacy.

From start to finish, Stephen F. Cohen was among America’s best historians of his generation, putting aside the specific subject matter that he treated: Nikolai Bukharin, his dissertation topic and the material of his first and best known book; or, to put it more broadly, the history of Russia (U.S.S.R.) in the 20th century.

He was one of the very rare cases of an historian deeply attentive to historiography, to causality and to logic.  I understood this when I read a book of his from the mid-1980s in which he explained why Russian (Soviet) history was no longer attracting young students of quality:  because there were no unanswered questions, because  we smugly assumed that we knew about that country all that there was to know. That was when our expert community told us with one voice that the U.S.S.R. was entrapped in totalitarianism without any prospect for the overthrow of its oppressive regime.

Caitlin Johnstone (ICH) observes, "In a world that is increasingly confusing and awash with propaganda, Cohen’s death is a blow to humanity’s desperate quest for clarity and understanding."  RT's CROSSTALK BULLHORNS addressed his legacy and the legacy of Ruth Bader Ginsburg.

In the US, the presidential election is weeks away.  Will Democratic Party nominee Joe Biden make it to the finish line?  THE NEXT NEWS NETWORK has some video that makes you wonder.

Grasp that this is after weeks of resting and, yes, hiding.  In Iraq, parliamentary elections are being floated for June 6th.  Over the weekend, Prime Minister Mustafa al-Kadhimi met with Speaker of Parliament Mohamed al-Halbousi to stress the need to work towards getting an election law passed. Is everyone on board for elections?  Apparently not.   Hayder Tweets:

Tomorrow’s agenda for #Iraq's council of representatives. They are still stalling the finalization of the electoral law. The more they stall the tougher it will be to hold early elections. And it is almost impossible to have fair early elections now.

The stalling in Parliament comes as a ceremonial figure jumps into the conversation.  Mina Aldroubi (THE NATIONAL) reports:

Iraq needs reforms, security and stability before it can hold a free and fair election, President Barham Salih cautioned on Sunday after the government said it plans an early national poll.

The administration of Mustafa Al Kadhimi said in July that early elections will be held next June, a year before the current parliamentary term ends. It has been a key demand of many of the anti-government protesters on the streets since last October.

"Reforms requires political will and the holding of early, free and fair elections that will give priority to public opinion and demands and are away from the power of arms, fraud and interference," he said during a conference on combating violence against women.

Observers: The political and economic environment in Iraq has not changed in favor of holding free, fair and transparent elections that result in political forces other than those dominating power, which employ money, weapons and intimidation to survive.