Howie is my choice 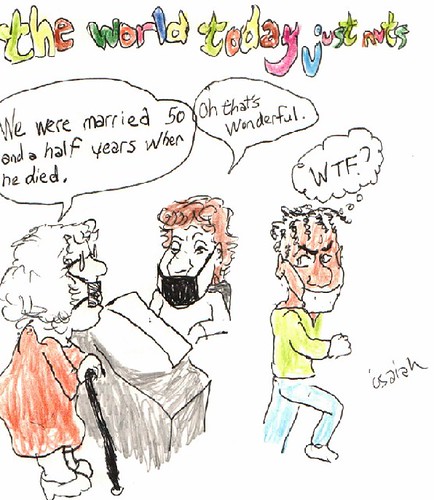 That's Isaiah's THE WORLD TODAY JUST NUTS  "Does anyone really listen?" -- it went up Sunday.    And this is an ad for Howie Hawkins campaign.

You do have choices beyond Joe Biden and Donald Trump.  Howie is my choice.

"Dismissive and glib."  That's how Kyle Kulinski described Noam Chomsky's attitude on a recent YOUTUBE segment.  I know this because a friend played about a minute of it to me over the phone this morning.  I'm not interested in Kyle's 'podcast.'  I don't like the way he speaks, I'm not talking about the sound of his voice.  He needs to learn that the body has more than one resonator and take it out of his nose.  His voice is thin and annoying.  But I don't like the way he talks.  I don't need to hear a segment about his nuts.  I'm sorry, he's not good looking, he's not sexy and why do I want to hear him yammer on about his nuts and what kind of underwear they like and blah blah blah.

I'm not going to link to him for the above reason.  But Noam Chomsky wants you to vote the lesser of two evils.  Noam would be better off worrying about himself.  He'd actually be better off getting honest with his large fan base about who he really is (Noam knows what I mean, I've known Noam for decades).  Instead, he wants to hector others.

Brihana Joy Gray and Virgil Texas are doing a new program entitled BAD FAITH.  On YOUTUBE, they have one brief video uploaded.  I'm stating this to remind you that I'm done with 'podcasts.'  I'm tired of the sound quality, it hurts my ears.  If they can get on a real platform like YOUTUBE, I'll listen and even repost.  But I'm tired of listening to sub-standard sound that hurts my ears.  I did it over and over for years but it's just not worth it to me anymore.  It's not a reflection on any host and it's not their doing, it's just the format and the sound quality.  And it hurts my ears.  If they post to YOUTUBE and I find out about it, I'll gladly note them here from time to time.

But our main point here is Noam has no reason to be dismissive or glib.  He's doing the same nonsense he does every four years.  It's a shame people are more tolerant of it today than they were in 2008.  He had to change his public stance in 2008 -- or pretend to.  Noam's a good little asset and he knows that and he knows how to work that.  He's not an honest broker and I'm tired of pretending for him.  I'm tired of being nice about it.

If his work means anything then he needs to stand by it.  But he doesn't.  Every four years he comes along to tell you how to vote and it's always a repudiation of his published writing but we're never supposed to notice that.  91-years-old, you'd think he'd be able to tell the truth.  Pathetic.

On podcasts, Rebecca's husband texted me about Katie Halper's hideous Sausage Show.  (See Rebecca's "katie halper's hideous" for more on last night's live show.)  It's beyond stupid.  Oh, let's be disorganized and debate which announced topic we should go with and then let's Aaron Mate run off at the mouth on the topic no one really cares about by going down a sideroad and never in the history of the UN blah blah blah blah.  The announced topic was Hunter Biden.

As they drank their liquids and goofed around it was purse nonsense.  It's like that horrible Vaginal Book Club or whatever that Felicity Day does.  That's our 'progressive' Felicity Day who explained -- not joking -- that she didn't watch CAGNEY & LACY because it was about two lesbians.  No, it wasn't.  That was a right-wing reaction to the show and it was a reaction that crippled the show in many ways.  CBS was forever giving notes and making demands that one's husband be on and that the other's boyfriend be in an episode -- but not too much sex, don't want them to think she's a 'tramp.'

When you present as a feminist and pro-woman, you need to know your facts.  I get that she was home schooled.  That doesn't excuse her ignorance as an adult.  And to pimp that lie?  Stop pretending you're informed and you have anything to offer because you don't.

Katie wanted to discuss Hunter Biden (we noted the story in yesterday's snapshot) but she had to stop in the middle of the podcast.  Why?  She hadn't read the article.  She had to read the article to get up to speed.  Despite the fact that this was the second billed topic for her podcast before it aired live.

This is so idiotic.  You don't do your work live and make people wait for you to play catch up on their time.  She had a hissy fit at the end of the first segment.  Why?  Her first guest was yammering away like an expert -- and he really wasn't, not on the topics he was discussing.  Maybe he can fool the uninformed but I studied Constitutional Law.  Jonathan Turley knows what he's talking about.  Many others don't.  There was a columnist who didn't.  And for years, we looked the other way.  Then he was doing real damage and I pointed out here that he wasn't a Constitutional Law expert despite billing himself that way, he had no training in the subject matter.  He had a hissy fit over my pointing that out but it did end his column with the magazine that had been publishing him.  (And that magazine should have done some research of their own to determine his credentials before presenting him as a Constitutional Law expert.)  The late Michael Ratner was a Constitutional Law expert.

Because Rebecca's husband texted me and because it was on YOUTUBE, I watched as much of Katie's nonsense as I could take.

Rebecca is right that it is shameful on Aaron Mate's part that he giggles -- like a little boy -- that journalism is being censored.  Then, later in the broadcast, he wants to put on his stern voice.  No one needs that nonsense.  There is nothing funny about censorship.

Katie and Aaron both want you to know that they are sympathetic to Hunter.

And pretending that poor little Hunter deserves our sympathy?  For what?  For shaking up with his dead brother's wife?  For taking money he shouldn't have?  For shady deals?  For refusing to admit that the child was his?  For refusing to pay child support until the court threatened to take the whole matter public?

And let's remember when he slept with Beau's wife, he didn't just start hitting on the widow of his brother, he did it while he was married and while he had children who were old enough to know what was going on.  "Call her 'Aunty Mommy,' kids."

Anyway, so Katie has a hissy fit after her first segment and tells her audience that they can't leave negative comments or ask questions for the next guest when she has one guest on!!!!

Shut the f**k up.  You put on a piece of crap podcast and you should be glad anyone bothers to even listen to your nonsense.  And the Hunter topic was what everyone wanted to hear about.  So you shouldn't have opened with your chatterbox and done your unguided and unformed interview.  You're not talented enough to go live, Katie, clearly.  Having punished your audience with that dull and meandering segment, you then finally brought on Aaron for the Hunter segment.  And then you wanted to waste more time going back and forth over whether or not Hunter should be the first topic of the segment or not.  It's unprofessional and its unorganized.

I don't watch 'reality' TV.  I don't have time for garbage that Katie's doing.

And let's also not forget that she presented as pro-woman (no woman running with Spencer Ackerman is pro-woman) but how many weeks ago was it when she last had a woman on her pretty much daily program?  Multiple men, no women.

I'm sick of it and I don't have time for it.  She should be ashamed of herself.  At least she finally washed that greasy hair, though.  I will give her credit for that.

Aaron wanted to tell you that what happened with Syria -- the attack that wasn't but was promoted as real -- is the biggest story of the century.

I'm tired of the 'erection' of false gods (all of whom tend to be male, have you noticed?) who don't really tell the truth about anything.  I'm tired of their podcasts where they bring their friends on for what amounts to Stoner Talk that they think is interesting and that whomever has built them up to god status thinks is interesting.

Jimmy Dore is worth following because he tells uncomfortable truths.  He does serious issues and serious topics.

Compare the way 'journalists' Katie Halper and Aaron Mate covered the Hunter Biden story with the way Jimmy does in the video below.

Jimmy's working for the truth.  He doesn't have to be.  He could just waste time the way Katie does.  Oh, here's what my dad, a doctor, thinks about Donald Trump!!! Just stop.  If that's what you have to offer, you have nothing to offer.  But, Katie, is your mom alive?  I ask because I'm just wondering if your internalized sexism is so great that even with a living mom, you bring your father on multiple segments over the last weeks but never bring on your mom?  Oh, Katie, your hatred for women is truly appalling.

The media landscape in the Kurdistan Region of Iraq includes both party-affiliated news outlets and independent outlets.

The outlet’s critical coverage of the KRG has led to a crackdown. On Sept. 16, NRT presenter Shwan Adil was arrested and released on bail in the city of Sulaimaniyah. Adil is being sued by a senior member of the PUK, the second largest in the Kurdistan Region, for defamation.

In the region’s capital Erbil and the city of Dahuk, NRT’s offices have been closed since August.

NRT risks all to report . . . and Katie's busy playing drinking games and thinking she's some hard hitting reporter or commentator.  Wasting all of our time with nonsense.
This is a video from Finland's Ministry of Foreign Affairs.

See, there are real issues out there.  There are lives actually in the balance.  But by all means, let's feel sorry for Hunter Biden whose actions include cheapening the service.  He gets his dad to put him into a cushy guard spot that he didn't deserve and he can't even stop the drugs long enough so he ends up being kicked out in a matter of weeks.  He sullied the military and it's amazing that no one's bothered to call him out for that.  He wanted a title and a credit.  He didn't want to earn it, the way his brother Beau did.  So he got daddy to create a position for him and he was going to ride that credit as long as he could . . . but he couldn't put down the crack pipe.

Where's the drinking game for them, Katie?  Where's the endless gas bagging over their plight?  Where's your sympathy?

We'll again wind down with this from The Feminist Majority:

Join us for our virtual conference Fired Up Ready to Vote this Saturday!