That's Howie Hawkins and Angela Walker with their weekly discussion of issues effecting us all and how the Green Party would address these issues.

And the Green Party notes:

"There's no doubt that climate change is an existential crisis to humanity and the planet. Biden needs to formally declare a climate emergency and launch an all-out mobilization of national resources to give current and future generations a fighting chance for a future," observed Howie Hawkins, the Greens' 2020 presidential nominee.

"Democrats love to lecture that half a loaf of bread is better than none, but the president is offering half of a parachute when we're about to be kicked out of an airplane," said party communications manager Michael O'Neil.

The Green Party contends that there are only seven years left before worldwide greenhouse gas emissions surpass the limit required to keep warming below a threshold, which if violated, will trigger "catastrophic" climate change.

"Biden and the Democrats must, at long last, stop following the fossil fuel companies and their campaign contributions and start following the science," said Green Party national co-chair Margaret Elisabeth. "That means a goal of zero greenhouse gas emissions by 2030. Aiming short of that is a plan to fail, before we even start."

Charmed?  Didn't watch this week's episode yet.  Maggie's hair is just too awful.  Reminds me of when I got a spiral perm thinking I'd look like Lisa Bonet or something.  Burned my hair out and left it straight for months.  It was a nightmare.  I was in high school and felt like it was all anyone could notice.  I'm reminded of that when I see Maggie's bad hair this season.  The actress should not have gotten a perm.  It looks awful.  Is there no way to fix it?  If not, could they consider having her wear a wig?

Wednesday, April 28, 2021.  The failure of the Iraqi government continues to garner attention following Saturday's hospital fire in Baghdad, an Australian man is being held in a prison with no reasons for his arrest being provided, and much more.

In a desperate attempt to stop protests following the fire at Ibn al-Khatib Hospital in Baghdad on Saturday, Iraq's Prime Minister Mustafa al-Kadhimi had declared three days of official mourning. It may have caused some to cease protesting but protests have taken place this week and they continue to take place such as in Basra today.  ANADOLU AGENCY reports:

Hundreds of Iraqi workers shut the main headquarters of the Electric Power Production and Transmission Company in the southern city of Basra on Wednesday in protest of delaying their salaries.

Protesters say the company has refused to pay employees with temporary contracts for the past six months.

Demonstrators prevented employees from entering the building and threatened to stage an open-ended sit-in in front of the company if they were not paid, according to eyewitnesses.

The hospital fire has yet again exposed the corruption in Iraq.  At least 82 people died with 110 more left injured is the official count from the Iraqi government.  The official count.  The actual number may be much higher.   Sura Ali (RUDAW) reported earlier this week:

The death toll of a massive fire that ripped through Baghdad’s Ibn al-Khatib Hospital Saturday night has risen to around 130, according to Iraq’s human rights commission.

A report released following a fact-finding mission by the government-funded Iraqi High Commission for Human Rights reports a higher number of casualties than the government’s previous toll, on Sunday, of 82 deaths. It notes that many of the bodies have yet to be identified due to being burned beyond recognition.

This wasn't ''Oh, how sad a fire resulted in all of these deaths."  This is not just a tragedy, it is an injustice because it could have been easily prevented had the government followed written safety measures.  This is a governmental failure and the Iraqi people are expressing outrage.  Prime Minister Mustafa al-Kadhimi came to power in May of last year.  Like all of the post-2003-invasion prime ministers, he pledged to end corruption.  He did not.  And now the same interests involved in the corruption that led to the loss of so many lives in Saturday's fire?  Mustafa needs their support if he's to remain prime minister  after this year's election.  Julia Marnen (NEWSWEEK) notes:

A deadly fire raged Saturday at the Ibn al-Khatib hospital's coronavirus ward in Baghdad, Iraq, where medical officials said the building was a firetrap with safety shortcomings such as blocked emergency exits and broken fire extinguishers, the Associated Press reported.

Doctors have warned of widespread mismanagement in Iraq's hospitals, citing concerns over safety rules, particularly regarding oxygen cylinders, and a lack of smoke detectors, according to AP.

Samer said if a fire safety system was in place, lives would have been saved.

The  Iraqi people have every right to be outraged, the government is not representing the Iraqi people and it is ot protecting their interests.  One of Iraq's militias, The Hezbollah Brigade, is demanding the government resign.  To try to protect his own position, Mustafa has publicly insisted that the blame falls on health officials.  He forgets to note that the blame falls on him.  He's been in office for 11 months (May 7th, 2020 he became prime minister).  He is the head of the government, the buck stops with him.  He can try to push it off on underlings but why were the issues not addressed by the government once Mustafa became prime minister?  He was informed of this problem on two occasions -- one by health administrator in June of last year and again by two doctors in November of last year.  Real concerns were expressed directly to him.  Why didn't he act?

The deaths are an injustice and the blame goes to the government -- the one that Mustafa is the head of.  Shame on him for trying to push the blame off on others.

Staying on the subject of government's not serving their own citizens, Robert Pether.  We noted him in yesterday's snapshot..  Steve Jackson (THE AUSTRALIAN) explained, "An Australian father of three has been able to speak to his family for the first since he was seized by Iraqi police and thrown in prison three weeks ago after being tricked into attending a fake business meeting with one of the country’s leading institutions."   Today, Christopher Knaus (GUARDIAN) reports:

Mechanical engineer Robert Pether, 46, was arrested in Baghdad roughly three weeks ago, after travelling to Iraq from Dubai to attempt to restart work on the construction of a new headquarters for the Central Bank of Iraq.

After roughly four years of work, the project became mired in a contractual dispute between Pether’s employer and the bank.

Pether, originally from Sydney, was invited to Iraq for a “meeting” by the bank, which indicated the dispute was over and the work could be resumed.

His wife Desree Pether, speaking from Ireland, said the bank was, in fact, laying a trap.

“He and his colleague had their suits on and got arrested immediately,” she told the Guardian. “There never was any resolution and there was never any meeting scheduled. It was trap.”

Her husband has been thrown into an Iraqi prison.  They have limited any contact she can have wth her husband.  She reaches out to the Australian government -- which hasn't even issued a statement publicly.  Brittany Chain (DAILY MAIL) reports:

Ms Pether has sought answers from the Australian embassy, but claims she has been told she is not authorised to liaise on his behalf.

'They have no idea how to help him,' she said.

'They just keep repeating that they can't discuss the case with me without consent from my husband. There is no support for me at all.'

Daily Mail Australia understands consular staff are not able to communicate with family and friends unless they are a nominated contact. But Ms Pether claims given she is the one who reported his arrest, and that her husband has been so hard to contact, she should be informed of any updates.

She is his spouse, that alone makes her the nominated contact.  This is beyond ridiculous, it is beyond a bad policy or practice.  This is an example of a government failing the people it is supposed to represent.

One of my friend’s father is trapped in Iraq for no reason whatsoever. Twitter, do your thing. Help #RobertPether and his family. This needs to be addressed. 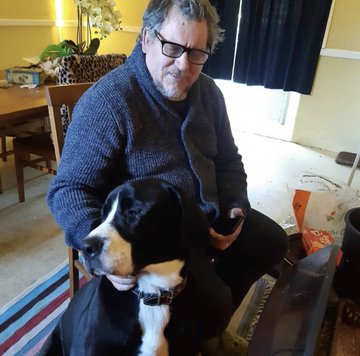 Public pleading is what Robert's family and friends have to resort to because the Australian government is not doing anything.  Desree and Robert live in Ireland.  The Irish government has done much more for Robert than his own country has.  THE JOE FINNEGAN SHOW Tweets:

Taoiseach says they will everything they can to help Robert Pether and his family
3:34 AM · Apr 28, 2021