That is a new video from Howie Hawkins' YouTube channel and they are calling it a Green Party 1010 workshop.

Remember when I noted that Howie was running for governor of New York?  Finally found an article about that.  Jessica Cain (WSKG) reports:

Hawkins and his running mate Gloria Mattera said their first order of business is to get the Green Party on the ballot.

The party lost ballot access in 2020 due to new requirements. Hawkins said he wants that law overturned, and he doesn’t plan to stop there.

A major part of his platform will be what Hawkins is calling the Ecosocialist Green New Deal. He wants to see a stronger state climate action program that would lead to 100 percent clean energy and zero emissions within 10 years, and an “economic bill of rights” including in part a $20 minimum wage and tuition free public education from pre-K to college.

Wednesday, April 27, 2022.  Barack Obama calls for censorship, Turkey continues to carry out War Crimes in Iraq and has now attacked the Iraqi military.

On April 21, 2022 former president Barack Obama gave a speech at Stanford University on the subject of social media. In typical Obamaesque fashion, he didn’t state his point plainly. He used a lot of time, more than an hour, to advocate for social media censorship. He only used that word once, in order to deny that it was in fact what he meant, but the weasel words and obfuscation couldn’t hide what Obama was talking about.

In 2016 when Hillary Clinton lost to Donald Trump, the candidate she thought easiest to beat, Obama first presented his lament about “disinformation” and “fake news.” His real concern was that Trump’s victory proved that millions of people paid no attention to or even scorned, corporate media. No major newspaper endorsed Donald Trump, the television networks enjoyed the ratings increases he created, but ultimately believed that a second Clinton presidency was in the offing. None of them knew that some 60 million people would go to polling places and give their votes to Trump. Hence the disquiet in November 2016, when Obama realized that having buy-in from establishment corporate media meant little if their narratives were rejected by people across the country.

Now Obama has to live with his handiwork in Ukraine. He and Joe Biden began the crisis when they partnered with right wing forces there in 2014 and overthrew the elected president. They are struggling to prop up the Ukrainians with billions of dollars while also trying to keep the American people from asking why they don’t have child tax credits, minimum wage increases, or student loan debt relief.

Obama’s answer is to cut off debate.

Humble is not a word anyone would use to describe Barack Obama.  And shame?  He feels none.  He lied bold faced to the American people.  He insisted he would end veterans homelessness and gae a date for it.  And he didn't meet it.  But the whorish media that he's defending wanted you to know that he tried.  He really, really tried.  No, he didn't.

And he didn't end it and that was the promise.  The fact checkers never went after his lie.

They should have but they gave him a pass on everything.  The way they refuse to cover all the gaffes Joe Biden repeatedly makes -- that hockey visit to the White House was a nightmare -- because let's not show the world just how senile and unfit for office Joe is.

But back to Barack.

He put his name to a really bad documentary for NETFLIX.  Really bad.  This was the thig that they gave him millions of dollars for.  And the whorish press was quick to do their job, comparing him to a actual filmmaker of documentaries, a man over ninety who had been following nature and the environment for years.

They pretended it was amazing.

It was garbage (Ava and I covered it in "TV: The Myths") and, as Stan noted, it never made it above number three and didn't last a week in NETFLIX's own self-reported top ten ("NETFLIX needs to cancel contract with Obama, stockholders need to demand it").  NETFLIX knew it was a dog.  That's why they provided Ava and I with it so we could do a review before it came out.  NETFLIX knew it was crap

So he's taken a huge amount of money from NETFLIX to do a job he's not qualified for and he's already failed out of the gate.

With all the troubles NETFLIX currently has, they can't afford anymore of these vanity projects in which a creator or 'creator' (Barack) is given a ton of upfront money and then leave the streamer having produced nothing that warranted any type of contract let alone a big money one.

The stockholders need to be demanding answers as to why Barack was given that deal to begin with since he had no background in creating content.  NETFLIX didn't owe him a gold watch and pension and stockholders need to demand answers and oversight on these huge money deals that keep getting made only for the creator to fail to deliver.

Turning to Iraq, where the government of Turkey continues to carry out War Crimes as it illegally bombs the Kurdistan and has ground troops there and has set up base camps.   THE NEW ARAB reports:

Kurdish political observers warn that Turkey's strategy behind its cross-border military incursions into the Iraqi Kurdistan Region (IKR) is not about simply fighting the Kurdistan Workers Party (PKK), but rather is "to occupy the region and revive the dream of the Ottoman Empire."

On April 18 Turkey launched "Operation Claw-Lock" against the PKK in the Metina, Zap and Avasin-Basyan areas of the Iraqi Kurdistan region. Turkish Defence Minister Hulusi Akar on Monday said it had "successfully completed the first stage" of its operation.

The New Arab also spoke to Yusuf Mohammed, the former speaker of the Kurdistan parliament, who has a PhD in political philosophy.

"Turkey's successes in its military incursions in the [Iraqi Kurdistan] depends on the international power balance and the conflicts in the region. But, Turkey has a clear strategy to re-annex the region and resurrect the Ottoman Empire," Mantik claimed.

"Turkek is carrying out this strategy gradually. Every year, it occupies some areas, especially the strategic mountain peaks inside the [Iraqi Kurdistan], and established military bases, roads and other things for its future operations," he added.

artillery shelling 3 weeks ago. This is in Barway region where 7 villages have already been displaced. #twitterkurds #Kurdistan #Iraq #Turkey
7:02 AM · Apr 21, 2022

Turkey is committing continuous violations that have no legal basis, nor are there any agreements between Baghdad and Ankara, the Iraqi foreign ministry said on Sunday, adding that Turkey cannot invoke a UN Charter article for self-defense without Iraq’s approval.

“The Turkish side is carrying out continuous violations that are not based on any legal basis or agreement between the two countries, and they invoke Article 51 of the United Nations Charter for self-defense, and this cannot be implemented without official Iraqi approval,” foreign ministry spokesperson Ahmed al-Sahaf told Iraqi state media.

The statement from Sahaf came after Foreign Minister Fuad Hussein was summoned by the Iraqi parliament on Sunday where he met with deputy speaker Hakim al-Zamili to answer questions regarding the Turkish operation along the Kurdistan Region’s borders.

If you're thinking about all the remarks Joe Biden has made over the invasion of Ukraine and wondering how many he's made about what's taking place in Kurdistan, the answer is zero.  Some ivasions do ot matter, apparently.  ot to him and not to the western press since they have failed repeatedly to raise the issue in White House press briefings.

They've been terrorizing the civilians in the Kurdistan and now they're firing on the Iraqi military.

A Turkish drone fired shells on a military post of the Iraqi #PMF. #Turkey #Iraq

The PMF is the Iraqi military.  It is not the PKK, the group Turkey claims to be targeting.

We'll wind down with this from the Kurdish People's Assembly:

A week into Turkey’s latest invasion of Iraqi Kurdistan, and the region faces further violence, displacement and instability. This shows the UK – and the West – urgently need to delist PKK as a terror organisation. Here’s why – and what you can do to make that happen. THREAD: 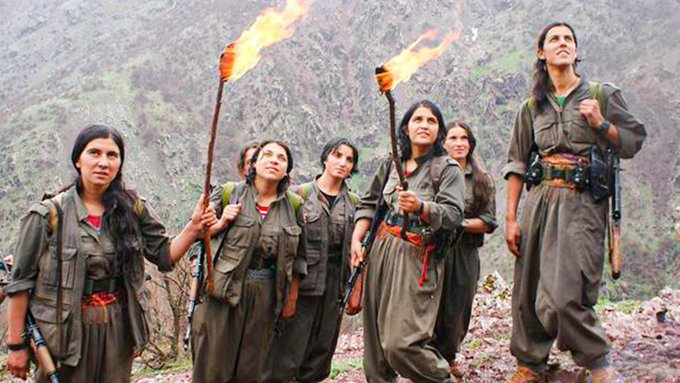 When attacking Kurdish regions of Iraq & Syria, Turkey’s stated aim is to target the Kurdistan Workers’ Party (PKK). But the PKK withdrew from Turkey after 2013-2015 peace negotiations. Conflict on Turkish soil has dwindled to virtually nothing following massive repression.
9:03 AM · Apr 25, 2022

Independent research proves neither the PKK nor other Kurdish political actors actually use neighbouring regions to attack Turkey. They are simply focused on self-defence, and providing basic necessities for people living under their care.

bbc.co.uk
Reality Check: How many attacks did Turkey face from Afrin?
One of Turkey’s justifications for its January offensive into the Afrin region of Syria was that it had been attacked 700 times from there. Reality Check looks into that claim.
9:03 AM · Apr 25, 2022

In reality, there are two reasons why Turkey launches deadly attacks like ‘Operation Claw Lock’. Firstly, Turkey can occupy swathes of Syria and Iraq. They have already established at least 41 bases in northern Iraq, violating international law.